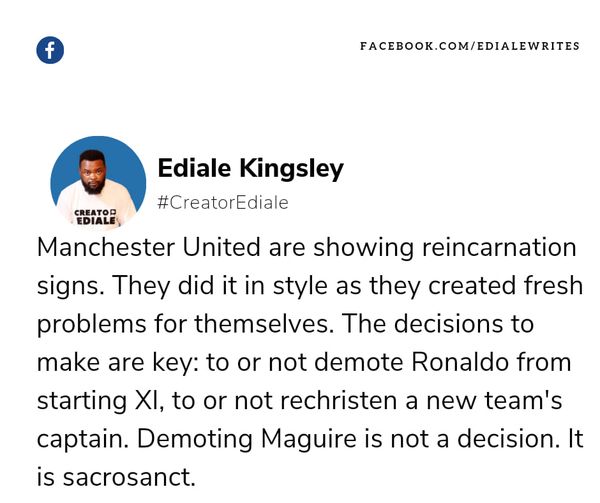 If you saw the United vs Liverpool game, you know the team rocked. Sancho had freedom. Players that skillful always do well with freedom. Now I wonder why they haven’t used this their back 4 lineup all the while.

Maguire’s agents should start talking to Chelsea. Ronaldo’s agents as well. This rhythm they had today, they should desire to keep. Meaning they should seek to start this same squad and lineup.

Meaning Ronaldo should become a super-sub. The only problem is a super-sub comes in and scores. And Ronaldo is way too big to be anyone’s super-sub. Great hunger. Ebere Beulah Orji told me United would not lose this game. I didn’t believe her. Liverpool were beatable.

They lost their scare factor and couldn’t bite. They were pressed and at some point in the game they definitely missed Sadio Mane. Liverpool down. United up.