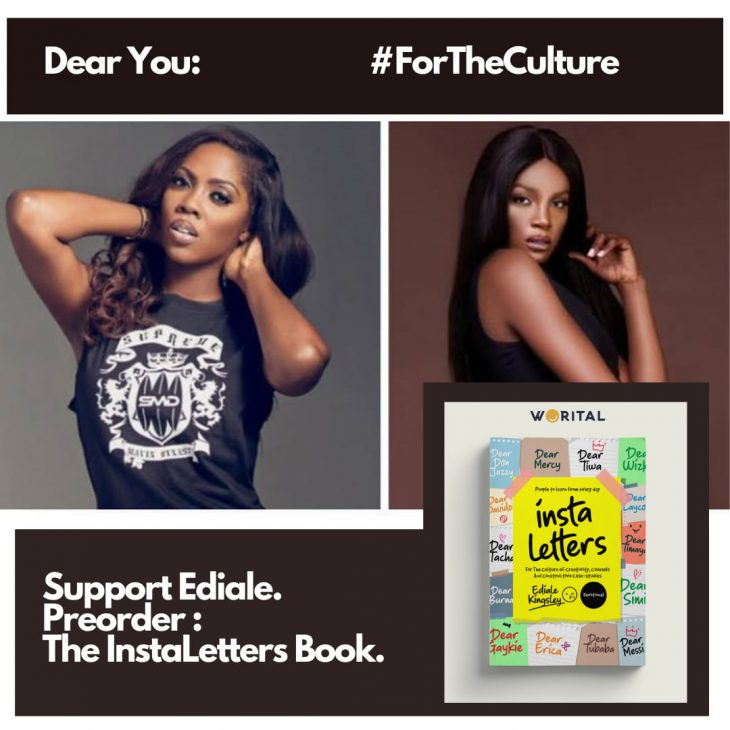 Entertainment Business is tough. A thin line separates you from fame and hunger . Some months you are broke with just fame to your name. Unless you are the King and Queen.

That’s why the fights must happen. All beef and proper diss tracks are primarily because of this. Tiwa has been queen for a long time. She’s been the one the brands see as queen.

She got that crown slaying. And she had to do what she had to do. While some female artistes keep saying, “God forbid, that small boy, I can’t date him. Wizkid is too small and young”. Tiwa was there doing everything with him.

That didn’t stop Tiwa from relating with Davido as well. For Tiwa Savage the formular is simple. Her creed reads, “ANYTHING FOR MY MUSIC. MY MUSIC COMES FIRST”.

In life whatever you do with such mindset will always honor you back. This babe doesn’t stay down when adversity hits because she understands that her music will be affected. She bounces into more music projects in the midst of challenges and pandemonium.

Tiwa has featured all the kings of the different genre. Olamide, Zltan, Wizkid, Patoranking, e.t.c. She knows she is the queen of Nigerian Music. Above that knowledge, she knows that there are witches and bitches interested in that throne. But she is not willing to let go.

All it takes, she will give. The Kimani that attacked her for the claims of blocking her from shows is not half as hardworking as Tiwa. Or where is the Kimani today. Can she tie Tiwa’s shoelace? No.

These days the main money comes from endorsement and brand ambassadorial deals. And usually brands don’t want to waste funds. 3000 brands can come for Tiwa in a month. They don’t care if everyone else is using Tiwa. They want the Queen.

Smart female musicians would rather strategize to get their share of the cake. That’s what has worked for Yemi Alade. She wants to be mama Africa, as in Queen of Africa Music. Since the Queen of Nigeria Music is taken.

And it is paying her so well. When brands want to reach for African audiences they call Yemi Alade.

But it’s always battle upon battle. Strategies upon strategies. When Tiwa was dissed by Seyi Shay and Kimani in 2019 it was a strategy. To gain relevance. They were trying to get Tiwa distracted or get her say what they suspected.

But Tiwa was smarter and got a good adviser. Her silence made the smaller contenders fizzle fast. We forgot the diss fast because the diss didn’t get replied. And Kimani never rose from that failure.

When a small artiste diss a big artiste. The smaller artiste gains momentum or some measurable shine. And obviously when two big acts go dissing each other, it also helps them get attention.

M.I and Vector are examples of big brands benefiting from a diss and reply brawl. So much so both of them have sealed that success with a recent music video collaboration that featured both rap icons sitting on two thrones side by side on the stage.

Seyi Shay hasn’t exactly done bad. Everyone can not be Messi. Looking back on how she started. She should be proud of her achievements. She should take this advantage. She has our attention. She should make hits now. And ride on this.

Whoever leaked this video of their brawl in circulation cant be Tiwa. She wouldn’t want to give Seyi the honors and press worthiness. Perhaps it’s Seyi Shay. But I doubt. If she was the one. She would have doctored or edited away some scenes that didn’t really celebrate her. Maybe it was released by none of the party.

They will be alright. They talked about exposing their dirty secrets and deeds. But both parties know they can’t. Because they both have dirty shits. Tiwa says she is proud of hers. And told Seyi that hers was the dirtiest.

That threat sinked in. And Seyi Shay maintained her promise to keep the dirty shits to herself.

Who is strong enough to dethrone Tiwa?

Perhaps those 3 can go have their thrones raised elsewhere. Cos Mummy Jam Jam is not retiring soon,