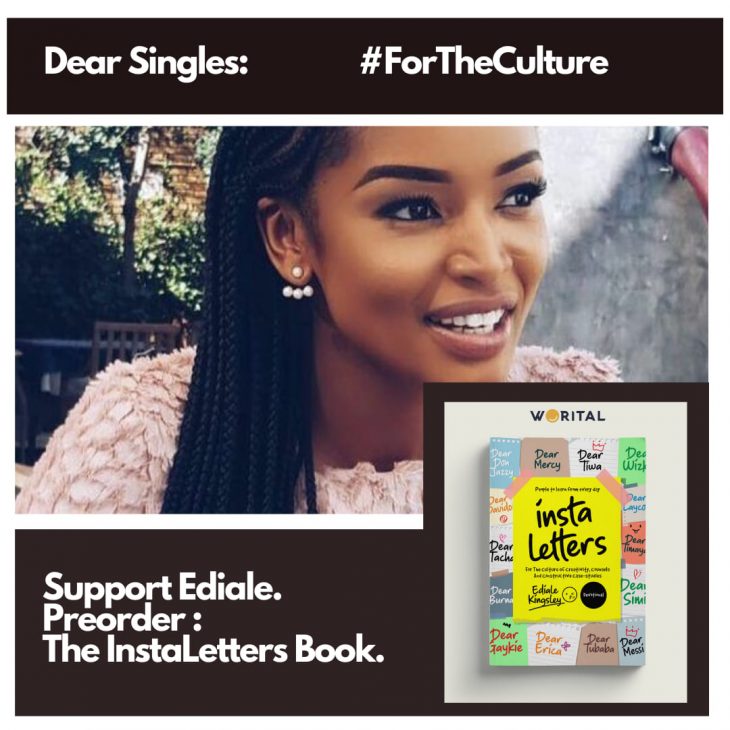 It gets lonely most times. They try to say marriage is not truly some trophy.

These ones will turn your life to something else.

Be the happy one.

The one that forgives. Don’t enter into that union with the mindset that you deserve better than the other half.

That’s how things get messy and shitty.

And always go for love.

If you don’t love him or her dont marry.

By that I mean we have made love a lot of things. To some, it is butterflies in the stomach. The kind that is triggered by lust for his or her beauty traits.

To others it is valve. They see so much valve in person and love him or her for that.

Growing up, as a kid.

I have always wondered.

How the heck do I love one woman and be her husband all through the existence of me.

I think it makes sense now.

Life is a decision.When you decide to love a girl or a boy. You should follow through that decision.

Don’t be like Jordan who loves Cynthia. But Cynthia is in love with Kris instead. Yet Kris thinks Ade is the best thing to happen to life. And Ade is already body, soul and spirit into Kris but will give everything to be with Jordan for eternity.

I subscribe to people wanting who wants them. Loving who loves you. And that’s where the work is.

Social media is suppose to make it easy.

Because marriage is reality.

My friends say I am not in a hurry to marry because I have Andrea.

I understand them. But I don’t agree.

I want to get married. Tired of being single.

I want to walk my lady down the aisle soon.

— Start having sex every day

These are genuine reasons to get married so don’t come judging me o.

Okay I am exaggerating.

Not all sex is sex.

Just resting the body on each other at times could generate magic for the soul and body.

Your Getting Married spotter

PS: I am thinking of proposing to Genevieve Nnsnji. Since Simi is taken and from what I observed I think second duduke is on its way.