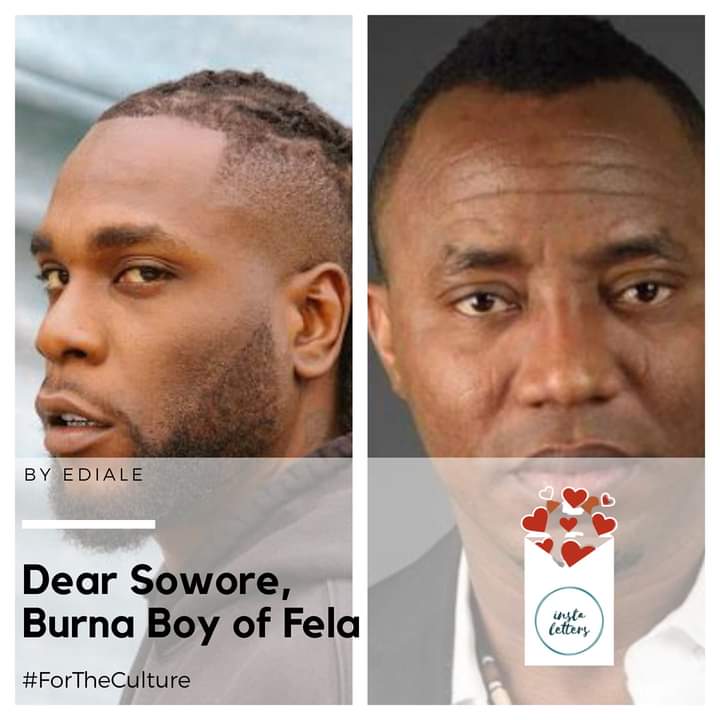 So while I was away making a movie.

I assume we all know him.

Is it possible nobody knows Sowore?

The dude that founded Sahara Reporters.

Yeah. That was the first thing that brought him to the limelight.

Well. Subsequent videos, texts, pics and audios however show that dude has been an activist.

He was born so.

We also know he became a politician.

He lost an election.

Okay. That guy decided to involve Burna Boy in activism.

Burna is the Boy that behaves like the Man called Fela.

The Boy that claims to be an African Giant.

He knows how to sing.

He is a global brand. A power house.

He borrrows some Fela swagger, at times lines, at times look — just to show he is Felaic.

To be Felaic means you sing against the oppressors and oppression of Nigerian.

It can also mean capacity to be blunt in telling the truth, as a message with a mix of rebelion and protest against a lie that is typically political, in a music.

And it’s that fact that Burna has benefited from such Felaism branding that made Sowore think he can rely on the super star musician.

But Sowore only succeeded in unveiling the real Burna Boy when he tweeted this message at him:

“Bourna Boy everywhere I turn people describe you as a revolutionary musician, the foreign media even celebrate you, compare you to Fela Kuti, but I am yet to see you lead anyone to a police station carrying a coffin for head of state! Join #Oct1stProtest #RevolutionNow”

The real Burna showed forth and replied the tweet:

“Everybody is a Fela fan and supporter now that he is dead. Humans are so Funny, You politicians are ALL the same (especially in Nigeria) and Frankly I don’t trust any of you.”

“I am not just one of the persons who you could describe as “Fela’s fan after he died,” I am a member of Fela’s household, ask Seun Kuti , as a student’s leader in the 90s I met and hung out with Abami Eda at home and the African shrine! If you want to be Fela be Fela.”

And these are the summaries of what Ediale thinks about the conversation:

— Burna Boy is a musician that cares more about being African’s number one musician at the moment than become a rebel. The branding is rebellion not the purpose. Burna is not Fela. His closest shot at being Fela is him being an Eedris Abdukareem.

— Eedris Abdukareemism is about fighting to be treated equally with western music stars. And then the audacity to claim a way paver. Remember the fight with 50 Cents? Well that is documented in the rapper’s social autobiography as being Felaic for Nigerian musicians. Same way Burna talks about that Coachella thing. And while Abdukareem believes he is a pioneer of modern Nigerian Hip Hop (or Afro Pop if you like). Burna simply believes the only pioneer before him is Fela (just also for the Felaic value of things).

— Sowore is also Felaic. A diff brand. A more practical type. But he had one of the wackiest plans in the history of take over strategy. His plan was: Since I am against injustice, corruption and bad governance, I will become a journalist. Then I will become a president. If I fail to be elected. I will then become series protest producer. I will protest. I will call it Revolution. Every one will join me. And the present system will be damaged. A new system will emerge. And I will become the President (or the change will come).

But that’s not really a brilliant plan. And Sowore is a brilliant man. And usually, history shows that brilliant men become unbrilliant and fail when they underrate their opponent or when they mess things up with miscalculated and misfired agenda.

Sowore, Abdukareem, Burna are all misfired Felaic brands. But then again even the original Fela was a hero with miscalculated agenda. You can not be imperfect and seek for perfection.

Seun Kuti is talking. He said the other day that he’d refuse to protest unless we have a well calculated agenda (he actually said unless we have a solid platform and structure that can benefit from the disruption order than end up bringing down APC only for PDP to get the mantle and the recircling continues).

Why Revolution? He highlighted the following points as reasons we must fight:

And so for all these he is inviting all of us to meet at the barricades on October 1st.

Just as I have said. This invitation will fail because of…

As we approach Nigeria at 60. May we continue to enjoy democracy.