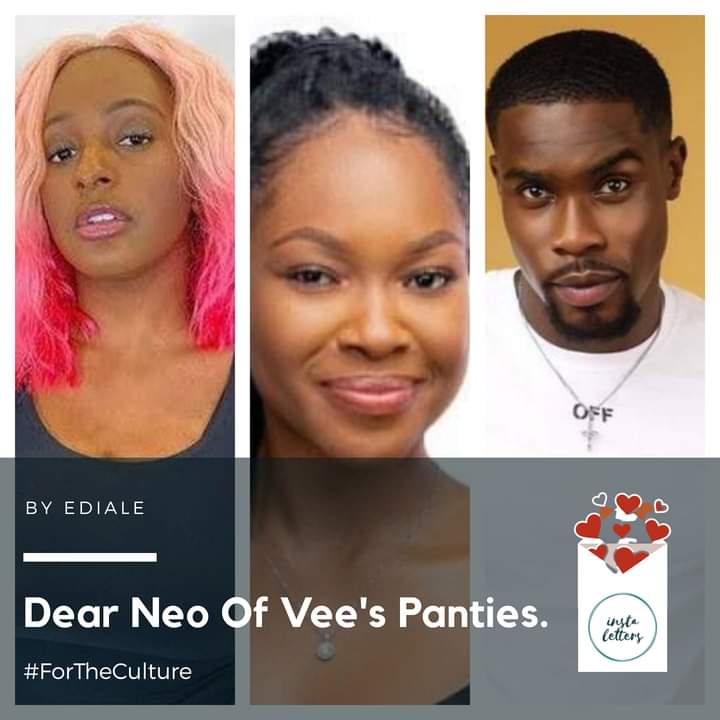 Woman Wrapper use to be a derogatory statement.

But that was then.

It seems like it’s even okay to be called Woman Panties now.

To those who don’t know. When anyone was referred to as Woman Wrapper. It meant that such a male fellow was a terrible woman pleaser.

Actually, it means that the person would break any standard principles for any woman.

Which looks like a thing every feminist would love. Right?

Well out with the old. In with the new.

Neo is the ambassador.

Oga has had a nice time in Big Brother’s house chasing his fantacies.

He is a lucky boy.

Neo, not all of us get this lucky.

I know their’s a thing known as Fetish for Panties.

At some point the Oracle’s of Ikorodu’s were even paying N1m or N500k for one.

The dark gods too are Woman Panties.

Well. DJ Cuppy, a woman who can get millions of Woman Panties at her disposal, has disappointed anyone who longed for such position in her life.

Cuppy, daughter of Femi Billionaire Otedola, wondered out loud on Twitter, ‘why anyone would not wash their panties themselves’

Yeah. She said it o.

And this is a girl that can afford her panties being laundry in United States, sunned in UK, scented in France, before making way to her delicate bum bum in Nigeria.

The money is available. The Panty Washers too.

But no. Girl is looking for men like Ediale.

Who do not wash panties.

And Ediale is looking for girls like Cuppy, who understands that I didn’t come to this life to wash undies but to help remove them in the most spectacular manner.

I am ordained to be a skillful pant remover of my wife.

My duty, once married, is to buy loads of panties for her too.

Because most times, we may end up tearing it. For effect. Only married people should understand this joke.

PS: This BBNaija season though. We have seen unique men. One Idiot here though just sent Cuppy a Mail, applying to be her official panties washer. His mail:

“Hi DJ cuppy
My name is Marcus and I’m a student in the department of health and home management
I’m one of your Biggest Cupcakes around here…
I hereby apply to be the washer of your panties no matter how much you hate anyone doing it I can do it even for free. CV is enclosed”