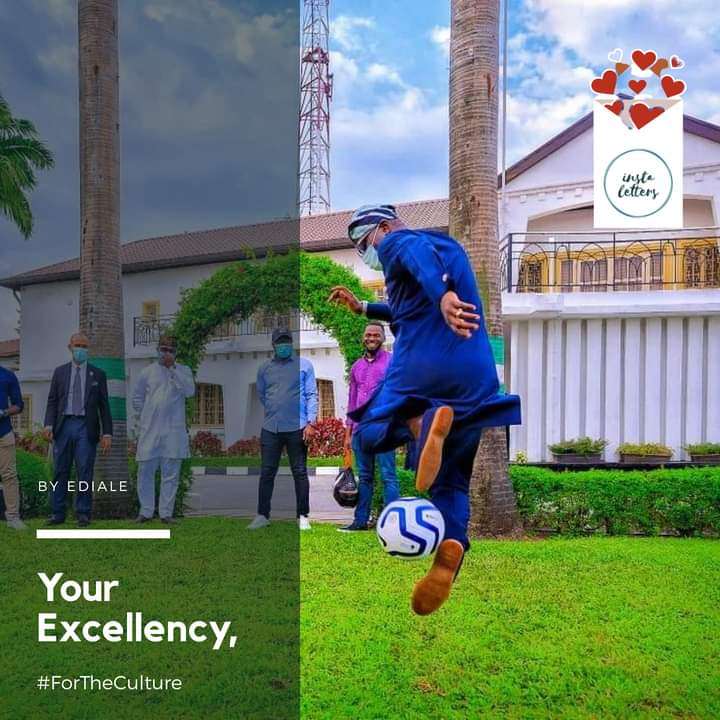 You are needed in Manchester United sir.

This ball control is what Manchester United needed to win yesterday.

And see the way you effortlessly and masterfully trapped the pass from Asisat Oshoala.

“Today, Asisat Oshoala paid me a courtesy visit. She is a worthy ambassador of Lagos from Ikorodu and we are proud of her. She spoke about her plans for the Asisat Oshoala Foundation and I promised to support her. We kicked the ball for a bit and I think I still have my skills.”

That was your message after the brilliance exhibited in the photo.

I’d appreciate of you can do something splendid in Lagos.

Football is a culture.

We are talking about a Trillion Dollars culture.

Lagos can become a manufacturer of talents.

As it is already.

More Asisat can come from Ikorodu.

More Ighalo can come from Ajegunle.

More Agali can come from Festac.

Lagos has all it takes to lead the other part of the Nation.

If you commit to it. It will flourish.

Over 10,000 Brazilians play professionally around the world.

Brazil is a nation in one piece today largely because of football.

Their economy. Their poverty. Their challenges are all managed by the saving grace of football.

It’s no coincident that the Brazillian General Election is fixed on World Cup years.

In Brazil football is a lifestyle.

They have a four tier league system.

And they also have State Championships which are used for the purposes of promoting clubs to the National Leagues.

Every town in Spain has a football pitch and team, and indoor football ( fútbol sala) is also played in sports centres throughout the country. Spanish children learn to play football almost as soon as they can walk, with the most promising players being snapped up by the major clubs and coached from an early age in football schools.

Football has played a major role in reviving Spain’s economy, and such has been its impact that by 2015, professional football had generated 0.75% of Spain’s GDP.

With some creative heads at work. I dare say Lagos can produce and distribute more than 10,000 professional players to the world.

If we do what we have to do well enough.

We will have players like Asisat manufactured locally and won’t have to beg English players to come play for Nigeria.

That we refused to polish Shakiru at Akowonjo. But rather beg Saka at London.

We play football in Lagos.

With the right programming. We can use football to kill CYBER CRIME.

Millions of youths in this land with talent are now being tempted to pick up a Laptop against a football for lack of opportunity.

And we can have a sustainable structure worthy of duplication in other states. If and if only Lagos can start.

MFM and Godwin Enakhena have shown to an extent that some things are possible.

Barca has an outfit in Lagos.

Other european clubs are also plotting their route.

Football is dead in Lagos. We can revive it.

PS: The Lagos City Marathon isn’t really our thing. Since 2016, we just host and other athletes from other countries come to win the available medals (3 Kenyans, 1 French and 1 Ethiopean so far). We are Lagosians, we dont like to run or see people running. We love football.