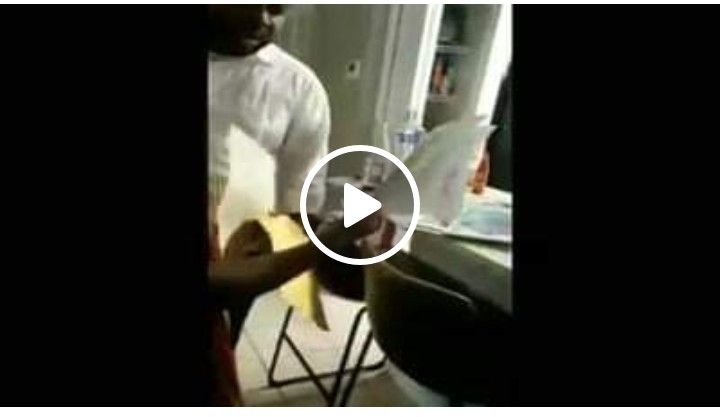 And to all who do not see anything wrong about the actions of a pastor just because he is a pastor.

I truly have nothing more to say to you.

And one of such idiots was in my comment section a couple of days ago.

I chose to ignore the fooldiot.

Here is a PASTOR.

Who was abusing his wife.

To the extent that even when the wife’s family were there. He still abused her.

To the extent the brother had to step in and fight for the sister.

Now he promised, as seen in the video, to kill the wife. On tape, in front of the wife’s brothers and sisters.

He fulfilled that self promise on Tuesday.

When we were debating who was wrong between Daddy Freeze and the Bishop.

The popular Ghanaian pastor identified as Sylvester Ofori was arrested after he murdered his wife in the United States.

The incident took place outside the 27-year-old woman’s workplace at the Navy Federal Credit Union, near the Mall at Millenia in Orlando, on Tuesday.

Barbara was shot by the Ghanaian pastor, her husband, near the business’ front doors on the 4600 block of Gardens Park Boulevard just before 9:00 a.m., an Orlando Police Department spokesperson said.

Tommey was pronounced dead at Orlando Regional Medical Center shortly after she was rushed there for medical attention.

Ofori, 35, was taken into custody at his apartment Tuesday evening, the OPD spokesperson said. He is being held at the Orange County Jail without bond on a charge of first-degree murder with a firearm.

During a press conference, Chief Orlando Rolón said the shooting was captured on CCTV.

“You can tell that she was surprised by what was happening,” he said.

Pastor Sylvester had reportedly been abusing his wife for a long time. Due to the abuse, Barbara was persuaded by her family to leave him. But Sylvester tracked her to her workplace and shot her seven times.

And that’s how she ends her life.

What a tragic way.

Don’t tell me shit about PASTORS or IMAM being different.

It’s not the fact that they became clergy that makes them ANOINTED.

It’s the fact that they have a WAY OF LIFE that is PERFECT.

I can wear an Army Uniform and not be a trained ARMY. I can be TRAINED and still become an ENEMY WITHIN. As we have seen amongst some terrorists who were actually trained by US Army.

God in the books of REVELATION said he will deal with these FAKE PASTORS.

The same way US ARMY doesn’t look back before dealing with the US TRAINED ENEMIES WITHIN.

…by their fruits we know them.

If you refuse to see the fruits, your life, your choice.

As seen herein, the brothers talked to the sister but she didnt listen.

PS: Learn how to RUN from this kind of entanglement.