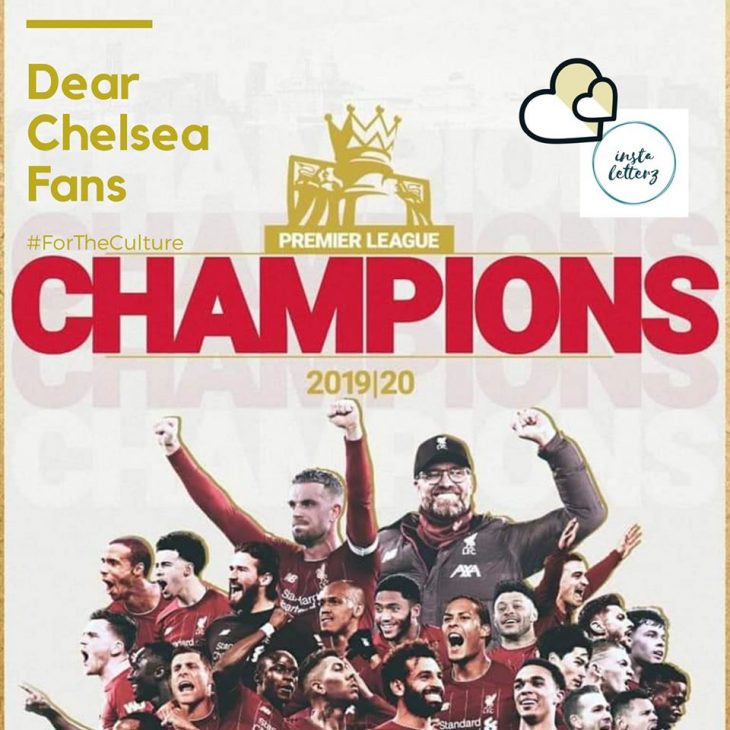 Let’s not forget that you guys didn’t win the League. It’s just a game. So let’s calm down and stop acting like you guys won the league.

I see (and hear) the noise.

It’s the night the Liverpool fans have been waiting for. They deserve their shine. Let’s allow their noise sound louder. Please. They worked for this.

What I am saying is this.

Quit the street party. Quite the social media party. Quit the jingles and celebrations.

I see many Chelsea fans drinking more than Liverpool fans. And it’s not fair at all.

What rights do you all have to be high tonight?

Because you beat Manchester City?

Remember Man City have dominated this fixture in recent seasons, winning six of the last seven meetings across all competitions stretching back to April 2017.

So guys calm down.

…that the run includes just one victory at Stamford Bridge, though, and historically it is Chelsea who has fared better in this contest with 68 wins to Man City’s 58.

Now it looks like you guys gave an assist.

Was Liverpool going to ever end this season without being declared winners?

Were they going to throw away such 20points gap?

It’s shame to Pep though.

That he allowed them to win with 26points.

One Pep Hater thinks it’s more than a shame.

“Pep Guardiola is finished & football has left him behind. To finish 26 points behind anyone, after all that money & this collection of players is criminal. He needs to take some time off & adapt to modern football. Managers like Flick & Klopp are reinventing the game”.

Let’s all face it.

The author of this tweet is just being a dark clown.

He is a Mourinho apologist but naaah. He shouldn’t disrespect Pep like this.

And he makes me — the Oracle — look like a fraud.

That’s why I like Arsenal. If I predict that they will fall. They fall. They don’t disappoint in falling.

Cheers to you all. To y’all Chelsea fans.

Just go easy with the joy and alcohol. That’s all I am saying.

Won’t be nice if you wake up tomorrow with a hangover and discover that you have lost your voice and lots of money over a one-night celebration that only means more for Liverpool’s fans.

PS: I see people who read and not comment when I get the predictions right celebrating and sharing my wrong predictions across the social globe 😂😂. I am still the Oracle.