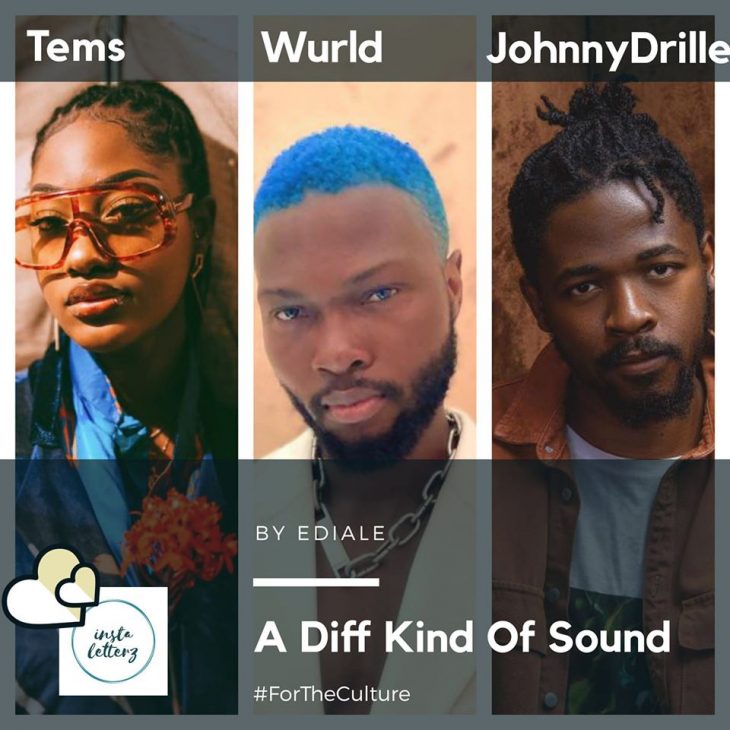 Three of the best.

You guys are the future.

We love the diff you bring.

A breath of fresh air. We hear JD and we start looking for someone to love.

JD’s songs are so cool that the soul dances. He isn’t singing ‘Gbese’ or ‘Gbebodie’.

Drille is all about a perfected quality of folk’ and alternative-rock songs.

If you don’t like Drille, Tems and Wurld then I can tell you don’t like songs of a certain class. No offense but I will understand you won’t value John Legend, Maroon 5, Ed Sheeran, Coldplay, Passenger, or James Blunt.

You would most likely prefer your regular pop stars. Perhaps the Wizkids, the Davidos, or even the Tiwas or Simis. Not Asa.

These lads took their destiny by the horns. And they have taken a huge gamble to be different. They rather be themselves than go ‘commercial’.

They are taking the same route Brymo has taken. It’s a risk and a gamble that is paying now. But they must understand the game though.

Tems left her degree in Economics and corporate job to chase this. Few singles later she has the stamp of Wizkid, Tuface, and large followers that call themselves Rebel Gang (because of her monster Mr. Rabel hit).

Drille left his father’s church choir group, dabbled into talent hunt projects until he caught the eyes of Don Jazzi. Despite studying English and Literature from Uniben.

Wurld was schooling and recording music in Atlanta. And he got ready.

Today I celebrate these brands.

PS: Anyone who doesn’t know Tems, Wurld & JD can start by downloading Luku Luku, Mad and Start All Over.