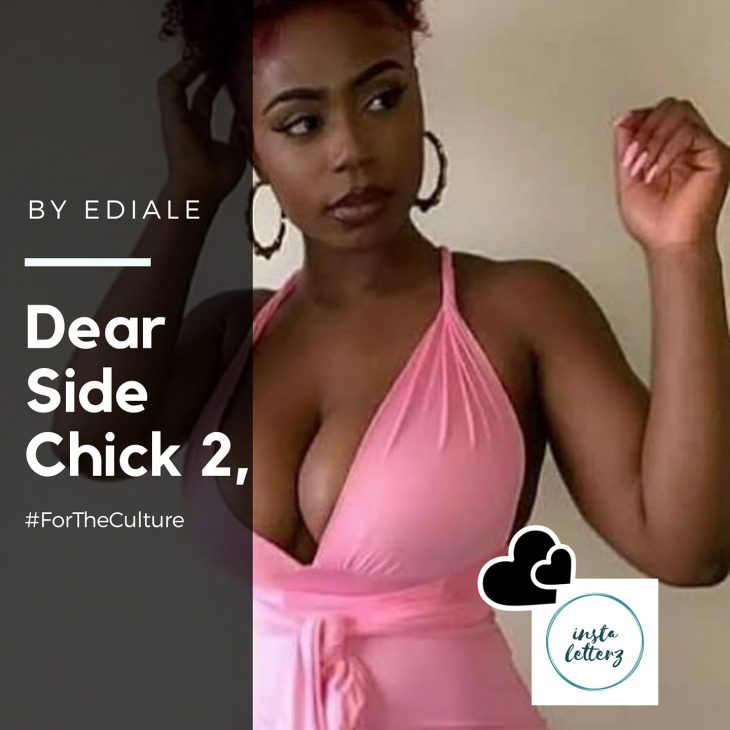 I am sorry I had to bother you again.

You’ve been trending. Do you enjoy the attention?

Ladies love it. In fact, humans do.

I know men who do everything to get attention.

So we all want attention.

Now, when a man and a woman come together to become man and wife. Only for you to come into the equation sooner. Things change.

Because time isn’t ever enough. You soon start getting the attention the wife should be getting. And usually that’s when the trouble starts.

So disturbing that some women have spiritually locked their husband’s finances so he will not be able to afford a Side Chick (Yeah, so I heard, and this is Africa). Now it’s also discovered that even poor men also find a way to have Side Chick.

But so we don’t disrespect you. I don’t think we should call a poor man’s Side Chick a Side Chick. They are more or less an Under Chick (you know, just underground something). And different things inspire this kind of relationship.

For instance, a poor man staying in a face-me-and-face-you apartment. Starts nacking another young girl in another room. Sometimes he even keeps more than one of these Under Chicks. What does an Under Chick want?

At times just the Jabulala is enough. Most times the Under Chick just wants coins. Like N500 per week. If she gets N5000 by mistake from the married man. She will hang the fan for hours. She will just submit her Yoyayo for you to keep.

And as my man, Abdul, said, the man will nack until he impregnates everybody. And we end up having battalions born in poverty. Some people say the poor man’s Jabulala works more than the rich man’s own. Apparently, since the poor man’s first head isn’t so bothered about profit and loss account or other financial investments. His second head is allowed to bother more on the accessible pleasures.

Most times the rich man’s major head won’t allow his second head to work. Too much business stress.

But on a serious note. Side Chicks and Under Chicks are here to stay. And the issues are with us to live with. So should the wives just accept the norm?

When we talk about how Side Chick enables the spread of STDs and the dangers of that. Since someone stated how she knows a woman that died of the irresponsible lifestyle of her husband who contacted HIV. The cases are there. Men bring these dangerous diseases home with their pipes.

And the innocent woman who must answer when hubby calls. Submits her Yoyayo to the pipe of infections.

Whichever way, I dare say, it’s then simply better to be with one partner. I will never be able to be on the side of a Side Chick. I just can’t. Even if she is ignorant of the fact that Oga is unmarried. I will just file it as stupidity.

Some ladies are stupid. You see all the signs that you are a side chick and you still form ignorance. He never takes you to his house even after one year of ‘doing’. He never celebrates you on his social platform or at his events openly. And you are forming Underground Chick? Wake up!

Guys are good liers. It’s hard work these days to detect them. Yes o, relationship these days require some great effort. That’s why we have many senior aunties that are not married. I don’t blame them. I support that they take the time rather than end up with a lie expert.

I hear we have side guys too. Some women are awesome liers too. In fact they are the best. So many guys are Side Guys without knowing. Although some guys don’t care. Especially if the position of Side Guy comes with sex and other goodies.

They will die there.

When they know. They will stylishly adjust. Find a serious woman they want to end up with, as man and wife in the future. While they maintain that coded Side Chick.

Sex is number one reason guys get Side Chicks.

Attention is number one reason ladies get Side Guys.

Now if you have a man that is hyper on his needs to offload by ejaculations. And you are not as interested. How do you solve this issue?

If you are a Muslim. Good news. You can allow the man promote his Side Chick to wife number two.

If you are a Christian. Yawa.

The Christian religion forbids more than one wife. So what happens?

PS: It’s a ‘banging’ world. We are all here on earth for Sex and Attention. All we do is so we can end up getting the desired attention or end up having a family. I am serious. Check it out. You went to school so you can end up having a good job that will sponsor your ‘banging’ relationship with your wife. You eat so you can be healthy for…

It’s a ‘banging’ world. Yet can we just please do all the banging in peace and understanding? Stay safe. Use condoms. Protect your families. Value yourself. Weigh your options and your decisions. Is the sex worth the health and lives of your wife and kids?