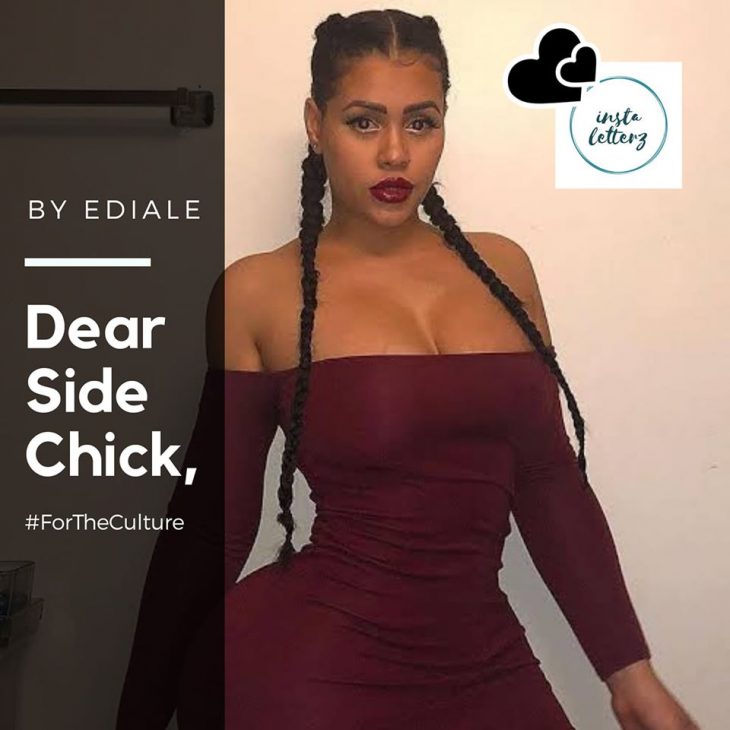 But what do we say to you?

Once upon a time, you were a very top secret. You were never on the radar. The only way wives knew you exist was when a lipstick stain is spotted on the upper side of the man’s shirt.

Or when a condom is forgotten on the man’s back pocket. Or when the man stops coming home early. It used to be a case of him saying he is working overtime in the office. And the woman finds a way to discover it was a lie.

It was after all these signs that they knew he had a side chick. These days, you have become more in the face. And you seem to have upgraded. Lipstick stains or condom situation are all old gigs nowadays.

Thanks to the internet and smartphone.

You are no longer a secret. You are as real as the wife these days. So real you are treated like a celeb. And you have caused some serious societal damage.

You were not always this celebrated. But you have adopted so many forms and I must commend how you have evolved.

From being bathed with peppery, hot, or dirty water. To being totally ignored. You have come a long way. When wives turned investigators and hunted you down. After which they descended heavily on you with beatings.

But people started saying it was wrong. They said to wives, “deal with your husbands instead”. And after too much of such advice. Wives listened.

They went for the men’s Jabulalas. They poured hot water on the man’s Jabulala. But soon the Jabulala healed and the man divorced the wives and retired his bruised Jabulala to the promoted Side Chick.

The wives hated these outcomes. It was not a win-win situation. So they just slaughtered the Jabulala off! It was bizarre. Crazy. Weird. The world rebuked the wives who had such a dark mind to perpetrate such evil.

“How dare you kill his little man?”.

The men soon got healed. And became men with no dicks. And the society ensured the women remained in such dickless union. As punishment, “You have killed his Jabulala. You uprooted his tree of life. Now you must stay with him like that. You too will be addressed as the woman in a dickless marriage”.

The wives had a rethought.

And so they had a meeting.

“We can’t burn the Jabulala. We can’t uproot it. What then can we do to our husbands for daring to have a Side Chick?”.

“We shall stab. And kill the husband”.

At least, nobody will force them to marry a dickless man. The dead can’t share a dick with any Side Chick.

The stabbing and killing started.

Like our darling senator said, that started “killing their husbands to death” (permit me to laugh).

But still, the society didn’t welcome this. And the judges sentenced the wives to death by hanging!

Now they have done the circle. And now back to the basics.

“Las’, las’… It seems we should just stick with beating up the Side Chick”.

But what if the Side Chick is stronger?

“We get a mate to live record the bitch. While we scream at her to leave husband alone”.

How long will this last?

Because from what I have read on people’s walls. They don’t like this new move.

They say “deal with your husband instead. He is the one that has a commitment vow with you”. So they have forgotten how that advice led to the killing of most men, right?

The men who don’t want to die. Prefer it this way. They think the women should stick with this latest strategy. They didn’t enjoy sleeping each night with one eye open. And even at that, they don’t close the one eye until all the sharp objects and knives are locked in the boot of the car or hidden somewhere unreachable.

Husbands, stay with your wives. Side chicks, find your own husbands.

Your Side spotter,
Ediale
#ForTheCulture

PS: Dear Side Chick. Since you like married men. Find a way to enjoy their wives’ madness. I can’t be on your side on this one. After all, you are the entitled SIDE chick. Since you have vowed to eat the man’s money and enjoy his love on the side. The wives have also vowed to block you on a coded side and give you their own venom. Sounds like a good time to repent.

PS2: Just to quench my curiosity, do we have Side Chicks for poor men too? I can imagine a girl being beaten for nothing. Or what does a poor man’s Side Chick get?