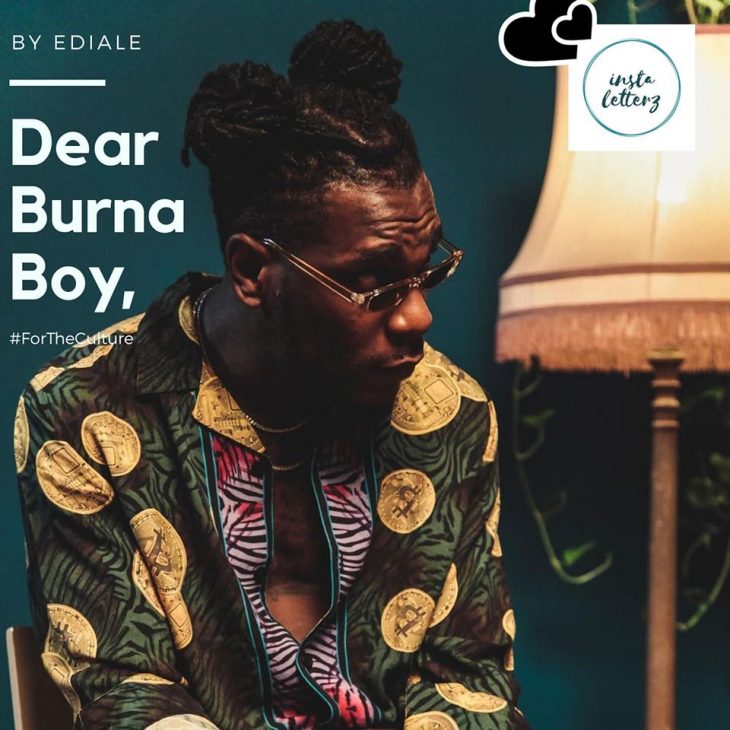 You are good. You are doing great. And I even felt you deserved the Grammy Award until it was given to Angelique Kidjo and I took time to go study Kidjo. Then I had a rethink.

But like Omojuwa tweeted — personally have a concern with people who are quick to say “I am the best.” If you are the best, you wont have to say it because you’ll hear it so much you’d even be embarrassed by hearing. More concerning when those who are actually great at what they do want to scream it.

It does amount to being unnecessarily arrogant. And it really doesn’t make sense yet. And I agree there are people who find arrogance sexy. I only have problem with such people when they also call out people to emulate humble people.

So Burna I am asking. What have you done that Wizkid, Davido and even Tuface haven’t done? And to really think you didn’t win the Grammy. What would have happened if you won the Grammy?

If you are Angelique Kidjo who has enough Grammy in her home, I guess you would have shut Africa up with your noise.

You tweeting, “Fact! I always knew I was and I am THE BEST. Everyone you think is the best KNOWS I’m BEST since Fela Kuti. But Timaya told me something a long time ago that made me not care about being the best. “The World can do without the Best” the world will still spin regardless”.

It’s quite petty. Femi Kuti has had Grammy Nomination too. Femi, who has Fela’s blood doesn’t spit such words. Even Seun Kuti is humble on this matter.

You say, “Nobody paved shit for me. Everybody dey find them own. I bin out here, if you knew the way they made us look weak by begging and paying the western world to like us you will see that no table was set and I’m the one that brought you the respect you currently enjoy”.

What does this even mean?

That people paid for collabo, means they paid western world to like us? So does Burna do collabo for free? Can an upcoming act get Burna’s voice on his song for free? Ofcourse not.

And we are talking about two Africans here. So what’s wrong when one pays for value? Davido can’t possibly get Chris Brown for free. Beyonce didn’t get the African stars she got for Brown Skin Girl and co for free.

You said you brought us the respect we currently enjoy. Currently underlined. “Cos this thing na turn by turn”. There was a time even Olumaintain got the former US Secretary of state General Colin Powell to dance a Nigerian step (Yahooze) on a Naija sound.

There was a time Tuface song was used as a Hollywood Soundtrack. Wizkid didn’t go begging Drake to feature him on One Dance. Sunny Ade was a frequent feature on top USA live TV shows. It has always been about time.

It’s your time and you are doing fine. Only you can stop you, the way you are going. So calm down and focus.

At one point or the other in our music history we have had people carry the torch for Nigeria and Africa. Is it not Eedris that was ready to fight 50 Cents the other day for respect sake?

You will come and go. You could only probably last longer than most of your colleagues. So make all the good use of your opportunity and shine even brighter.

Leave the praise to us. Some of us switched off our TV on the Grammy Award Show. At the point they gave it to some one else.

“The same people that wish you the best to your face are the same people that hope and pray you fail so that they can feel better about themselves. That’s just life. That’s why complements mean nothing to me cuz hate, jealousy and “it should have been me” are sugar coated by them” you tweeted.

And I say, since you know this. Good, just keep doing your stuff for the people to be the judge and praise-singers.

“Your yam don done, eat am with sense, forget those wey their own overdone or underdone. Unless you want to share your own yam”.

PS: Some naturally arrogant people will hide behind your arrogance now. Thinking they are on the right path.1