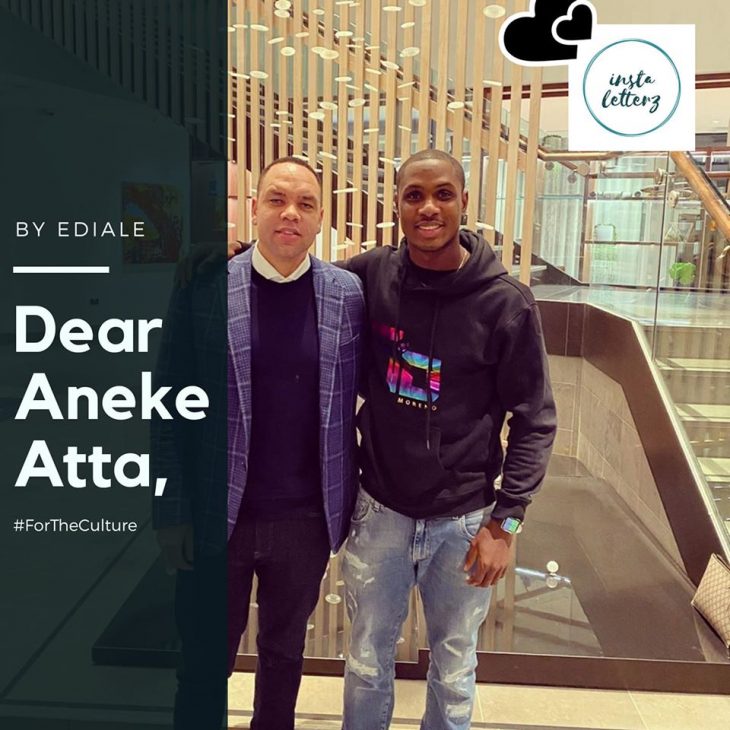 Fifa Super Agent. Emefie Aneke Atta. Man beside Jude Odion Ighalo. Nigerian. Nowaygean. Superman — And I do not heap praises on men that are not deserving.

As we await that Ighalo’s hat trick for Manchester United that will silence all his critics. I ink this one.

The relationship between you and Ighalo is more than a player manager Relationship. You said it was easy with Ighalo because apart from being a top talent, he is a player with an impeccable character and a professional to the core.

While Ighalo was in Norway you had some offers, but Udinese was better for his development. Locomotive Moscow called and offered him 4 times his wages in Udinese. Ighalo spoke to you and you told him the money in Lokomotive was very good, but not the right move for his career. And so he went to Udinese to build on his career.

I also learnt that while Ighalo was playing for Watford many agents approached him to switch agents but he refused. It’s difficult to find players working with one Agent for 13 good years. And this is one of the many things that make him a role model to the young players.

When Odion Ighalo nailed the Manchester United signing. I wore a smile. As a Nigerian, this meant a win for us. But I understand the politics, management and administration that ensure such deals go through.

You obliged. And I made the interview.

Speaking to you and your Chief Scout, Udia Attai, was eye opening as it was delightful. As a football journalist, I know what the basic challenges are as it relates with having players discovered and projected to the world and the national team.

And how bad agents have been a damaging factor in that gap. There are millions of young players across Nigeria who want to become an Ighalo or another Mikel Obi. That large market of raw talents has produced desperate wants.

Players want to leave the country. They need agents but most agents are not like you (Atta). Most are dubious and others just want to make money. I like the way you explained it. When I asked, if you think Africa and Nigeria is on the right path concerning the development and discovery of her many talents?

“I will say some African countries are doing good like Senegal. I was in Senegal they had lots of age grade programs, good facilities and standard facilities. But Nigeria as a whole, after the Under 17 what else? You hear Under 15 and others here and there but nothing really comes out of it. I think the major issues as it concerns with the discoveries of star talents lies in Academy. There are thousands of Academies in Nigeria but a lot of them are with the wrong motives.

“Not about discovering talents. They want to make money. And it’s not as if you can’t get talents from these academies. You go round and you see one or two but a lot of them have wrong priorities for these kids. You see a young boy of 17. He probably has a guardian or agent who is in charge of him. The next thing they are thinking of is how to make money immediately from this young man. Now, now, without thinking of his future as to which country will he go to? how will he develop into being a future Ighalo, Iheanachor and others? I will say only a very few academies are interested in the development of these talents. Majority are not interested, they just want to make the money.

“For instance, you have a player of 17 with prospects. He should be going to certain countries to develop, where his talents can be honed and polished so he becomes something great. It can take 2 or 3 years. But you see an offer come from a country like Kazastan, Albania, even Iran or Qatar promising to pay some good money for the young man. Before you know he travels there, makes some good money for his family. The agents takes his own. You may never hear of the player again.

“It’s only in rare cases that you see the player get lucky enough to redirect his steps and it is usually very difficult. I think the majority of academies are just interested in money over the interest of the player. But some few are there who still care in the development and projection of these players to the right places. Patiently waiting on the talents to develop and hopefully when they become something in the future everyone is happy”.

Awesome. Now I see why you have become a strong influence in African Football. You have players from France, Gambia, Nigeria, Norway, Ghana and other part of the world on your list. You are doing a great job of discovering and managing talents to commercial success. And I like your standing focus, I see the landmark success and don’t envy the basic challenges you and your working team are subjected to.

Your focus has been on talent, discipline and hard work. A lot of players have the talent and probably love the money that comes with the game, but lack the discipline and determination to take their career to the next level.The land mark success for you have been the ability to consistently discover and transform young talents to professionals doing well in their respective clubs over a short period of time.

The Greatest challenge is in spotting the next talent. It has become increasingly difficult to get top quality players. A decade ago you could just take a stroll to next street and find something interesting.Today you need a lot of scouting, traveling and patience to spot a talent.

I peeped into your list of players you rep and quickly recognized Odion Ighalo of Manchester United, Chidera Ejuke of SC Heerenveen, Suleiman Abdullahi of FC Union Berlin, Samuel Adegbenro of Rosenborg BK, Ohi Omoijuanfo of Molde FK, Jordan Attah Kadiri of Östersunds FK, Abubakar Ibrahim Aliyu of KÍ Klaksvík and many, many others.

I know that these many stars under your agency are going to start showing the stuff they are made off to the world in the nearest future. Some are already dominating. It’s great to have a Nigerian doing good on the global scene. Other nation have their George Mendez, Mino Riola and co. We have Aneke Atta doing us proud.

PS: I asked you and your team what is the easiest way for talents to get your attention. You said, “Performance. When we go round watching, we want to see quality, how the player performs, his game, seriousness, his approach towards the game. Basically how he responds, opens up, the passes, how he reads the game. And his character too off the pitch of play, this gets our attention as well a lot. I look for this talent and the response to game. And how he reacts outside the pitch. These are some things I look forward to”. Awesome