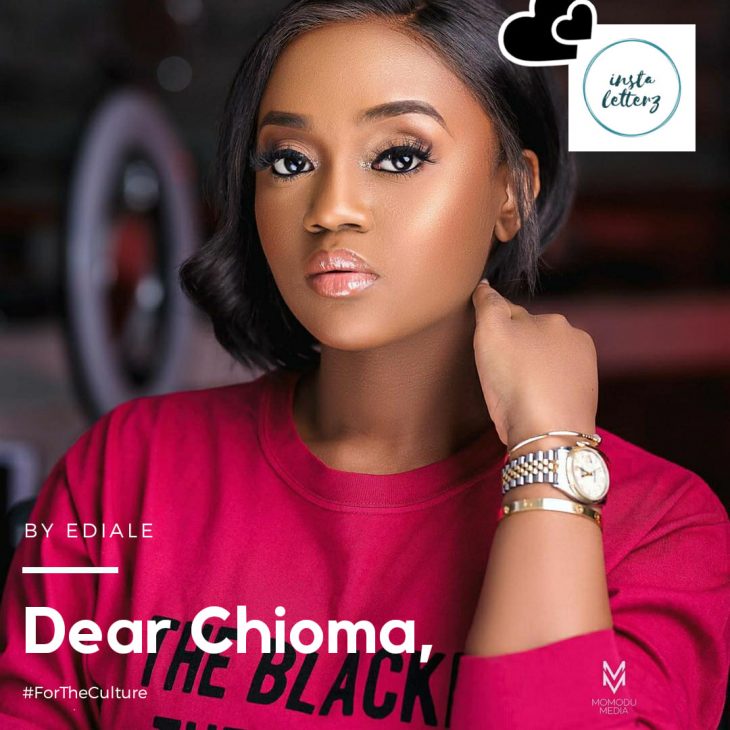 There’s nothing new under the sun. Get yourself together in this trying period. We all have our daily battles. Most of the time, we don’t choose them, our battles choose us. Although, we are responsible for what we harvest.

What we plant, grows and attracts us later for harvest. This one is here. What do you do? Harvest it and move on. It will be a lesson for many others. For you, all you need to ensure is that it doesn’t swallow you. It’s time to develop a thick skin and be totally quiet.

One, you don’t owe the world an explanation. Two, the world can decide to entertain themselves with the stories they come up with — it’s no news that your husband-to-be is in the entertainment industry. So fans, rivals, and all will always pry into the private matters for many reasons.

Kemi Oluloyo will feast on this. Before this fight between Davido and King Patrick of Golden Boy Records, she had always told us that you were here and there with guys. She repeatedly gave the gist of how you were a product of pimping. So, this new revelation from Peruzzi’s former manager kind of validates her reports.

And so because the rumor isn’t a new one, the new gist becomes believable. So in a matter like this, the only fact that can kill the stories is proof that you are indeed related to Peruzzi. Otherwise, just be silent.

If only, Davido treated King Patrick’s matter better. What does Patrick want? He wanted a full settlement for Peruzzi. He owned Peruzzi, by contract. And naturally, Peruzzi found 30 Billion Gang and decided to grow. And like we do in this part of the world. We do not treat such a transition properly.

I see it in our football. You sign to represent a footballer as an agent or academy. The footballer gets a better offer to go abroad. He dishes the original existing contract or treats it badly.

It has led to a lot of mess and fights in the local league. Nigerians don’t treat such things right. They usually think they can always get away with it. And true, most times they do. Because our industry is still growing. Our laws are weak. And whoever has time-fighting through such cases legally?

A serious roundtable discussion should have been quickly sanctioned to deal with King Patrick at the earliest stage. It’s a big business — music. Everyday Davido, DMW, and the 30BG are making money, investment and signing deals. That same machinery should be responsible for settlements and acquisitions when they arise.

It’s business and trade — buying and selling. So why should we allow things to go this bad? Davido has very sound management, The Plug, headed by Asa Asika. This is a minus for them. I have been following their tracks and I respect their works. I wish they managed this better.

I know, it’s a tough job. Well, the kitchen is for those that can stand the heat.

I don’t know how this revelation by Patrick put money back into his pocket. But I know he was provoked by the Davido’s statement that called him depressed (even though David didn’t mention any name in the tweet).

Well. King Patrick didn’t mention names too in his tweet. Twitter FC made the interpretations. It was really a no-brainer.

So we are here:

— King Patrick wants to be totally settled (whatever that means in English, in figures we are talking good money).

— Patrick is going to calculate all the songs Peruzzi wrote while with him, that Davido inherited (songs like FIA and co)

— Davido must be really pissed by the way his wife-to-be & mother-to-his-son was dragged in.

— Davido must have also discovered that Peruzzi isn’t cousin to Chioma. We don’t want to imagine the internal inferno here. But it’s not something too hard to solve after some bottles of alcohol.

— This marriage may never hold again.

Can love see this through?

It’s a case of love versus ego. I know men. We are all bags of egos. But some of us are strong. So Chef-Chi, you have a job to do here. Davido is your man, do you woman thing, show him the love he came for.

The past is the past. We all have our past. After all, Davido himself has a lot of baby mamas, yet you decided to be the wife. But you owe him the truth from your lips. We don’t need to know.

And if truly, you ever dated Peruzzi. Then he must be ‘sacrificed’. By that I mean he should leave 30BG. Because I know men. The thoughts will keep coming and it will affect the business and also the relationship at home. Peruzzi should go far from the family and record label. If the stories are true. There’s really no two ways to this.

How you, Davido and Peruzzi handle this will determine the things to come. That other woman is going to keep pushing things out. And by now, King Patrick would be thinking to use her as a tool.

She is a friend of Naira Marley. NM is Davido’s pal. So do the needful to keep her quiet to save your marriage. The needful can be one of the two:

— Naira Marley can beg her to stop the media attack. Or,

— Davido can pay her, through Naira Marley, to slow down on the media attack.

So do what you have to do to manage your love and family.

PS: This 2020 will be a year of month-by-month scandal. This one is the loudest in January.