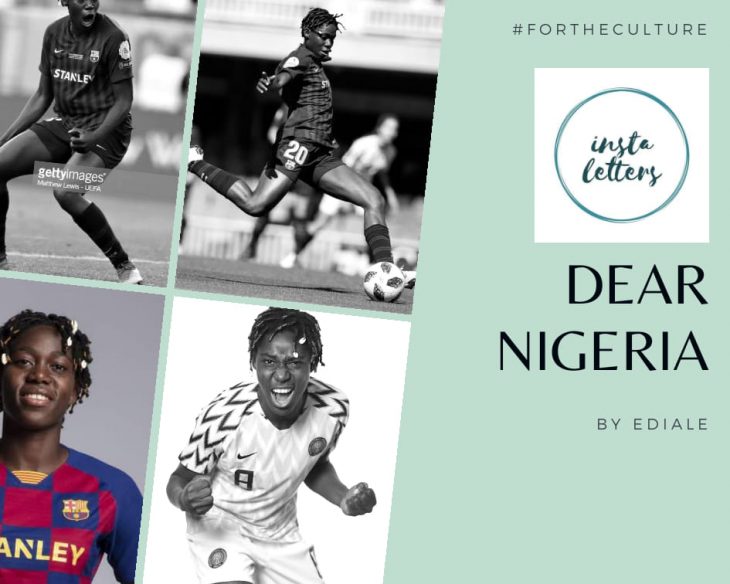 We are more divided than we are United. Things that should unite us separates us even more so these days. The quick case of Asisat Oshoala comes to play.

Football should unite us, but how true are we united by football? The military is another issue. How united are we by our military force?

Same of the same issues. We need a national renewal of the mind. We need a reorientation. But the one that will change us indeed must be really spiritual.

And that’s what religion is good at. One great tool of religion — it’s a spiritual belief and uniting force. If we are one nation of one religion, perhaps we would be far better of.

Religion divides us in this country. We first think about the candidate’s religion before we question the capability to lead us as president. Politics also divides us — APC, PDP, e.t.c!

Nigeria won’t forge ahead unless we break down all these forces that effortlessly disunite us. You can easily test the theories of these matters raised.

It’s easy for me to sell to a Barca fan than sell to a Chelsea fan. And Christians nowadays easily extend love to their folks in terms of Jobs and contracts.

When you become a football manager, a national leader, a team captain. The first assignment is to kill those factors that disunite.

Africa hasn’t won the World Cup since it started many decades ago. Why?

Because there’s usually nothing as divided as an assembly of a team from Africa. Once you see a team Nigeria in a tournament, any tournament.

If you are able to diagnose the team properly. You will see nothing less than 30 issues that fight against their unity. Whereas, it is a team’s sport.

Before they kick the ball, the white man is already leading.

I am not surprised hearing about the CAF Award shame. How no Nigerian rep voted for Oshoala. Not even the journalist. You would think the journalist should be free of vices. But no. She is from the Eastern part of Nigeria and Oshoala is from the Western parts.

At the last Women’s World Cup. I saw how the team celebrated in their rooms the news that handed them a chance to progress in the knock out stages.

I remember posting that video and citing everything wrong with how the celebration suddenly became a matter of fight between Oshoala and one of the girls. How it quickly escalated to some cheap brawl. One in joy sprinkled water. The other in disdain reprimanded the action of sprinkled water.

I made a mountain out of that mountainous situation (some felt it was a mole’s hill). But…
Some of us see better than others. Anyways. We are divided. We can’t forge into prosperity until we are United.

God created languages to divide man. Obasanjo and other historical leaders created more ethnic groups as well to further divide us. Whereas, we should be blurring out ethnic diversity. We need to reduce the states. We need to create more unifying factors.

PS: Our Filmmakers are disunited so Netflix, Africa Magic, and other content buyers come to the land and mess them up with coins for their creative works. If not the United Spirit between Simi and AG. Who knows what Ediale would have done? But thank God, we are born again.