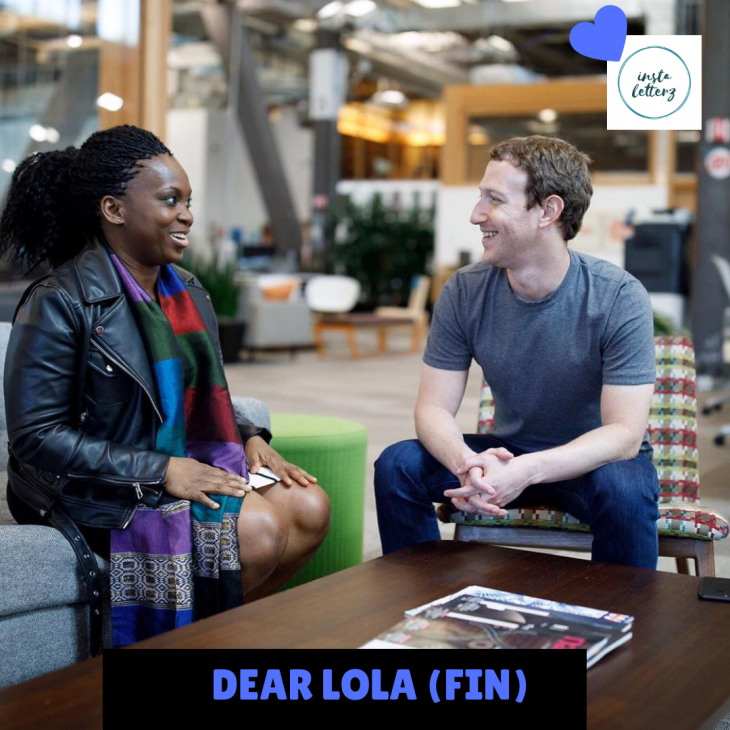 What have you done?

You have toppled an age-long culture on its head.  Turned it upside down and inside out!

The culture of silence and muzzling women has now been made redundant.

These Nigerian women talk too much!

Our mothers were not so eager to be heard!

A woman’s place used to be…

A woman’s place should have been…

You took on a small project and you used it to change the lives of millions of women.

What did you do?

You called a few women together and set up a woman’s group on Facebook called Female in Nigeria (FIN).

A group where women would speak of pain, joy, heartbreak, motherhood, relationships fantasies, ideals, just anything at all without being judged for it. A safe space for women who were hurting to find and build a voice that would get louder and louder. A group where women broke the taboo of silence for all time.

Was the time right for this?

How do I know?

Well, the numbers speak for themselves. FIN membership is by member referral only and boy did the numbers grow!

Everyone who joined added someone else they thought would benefit and before long, the membership rose to above million member mark!

Then the panic began!

Why are our wives, girlfriends, sisters always on their phones?

Are these just a bunch of feminists out to destroy marriages?

Can this group be made public so that we can see what plans are being hatched in there?

It was no longer business as usual because women began to speak their minds and stand up for each other against societal injustice. Women who had been muzzled for years were thronging into FIN. They needed a place to speak, to cry, to vent and to find validation in other experiences that sounded like theirs. The FIN spirit took over and showed us all the power of community and unity. Most importantly, this group helped bury that thinking that women are their own worst enemies!

For every stride being made, one could see those who felt threatened by these changes, shivering in their boots while others were standing up to take notice.

Mark Zuckerberg took notice! How could he not? Your group was the fastest-growing group on Facebook. So because of you and a few others, Facebook organised a community conference in Chicago. So that learnings could be taken of how this community of women had grown so much so that the previous name no longer worked for it and its name had to be changed to Female IN to accommodate women the world over.

Being the seasoned journalist that you are (From your years on radio and television – AIT and Raypower- fast forward to the Grammys red carpet), you have taken all these developments in your stride. Canvassing for the changes we need to make all over the world.

Daughter, wife and mother that you are, you still find the time to bring this vision of empowerment to bear on your world and to give our daughters the possibility of living in a truly changed society!

I thank you on behalf of a million women, who otherwise would still be silent on crucial issues at this time.

Thank you for an idea that became a miracle!!

We see what you have done Lola and we see you!

Ps. One clown here asked me if men can now join FIN. I laughed for a bit and told him in times past, they have tried and each time they caught out. Only a woman knows how to be a woman!