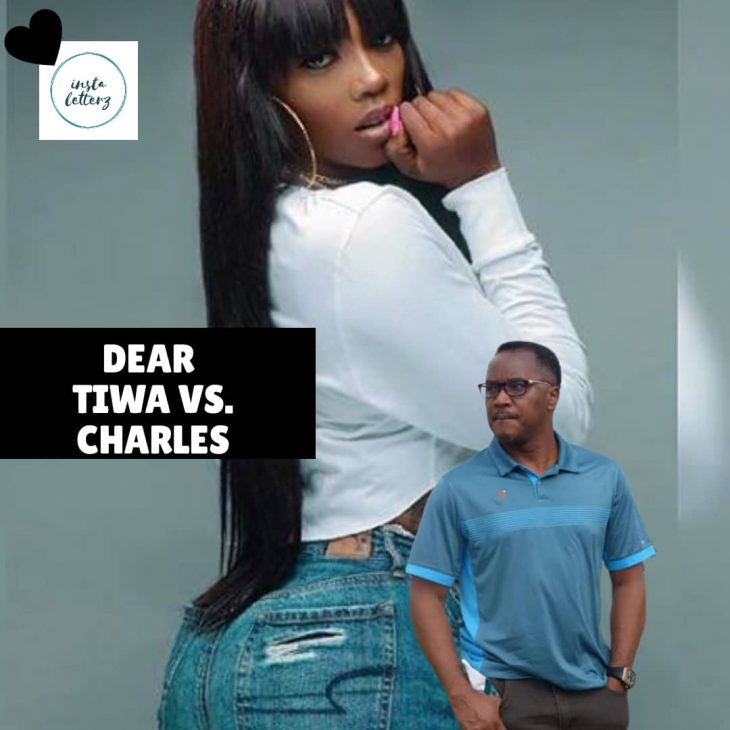 Things happen. Ediale writes and the people read. So this will not skip us at instaletters. I will ink. And before I go ahead to do my thing, I will present the dramatic script as it ensued. If it were to be an actual movie, a Nollywood. We can title it Charlie’s Savage Call. But this is the dialogue:

Charles Anazodo: Tiwa Savage was a guest on THEBEAT999FM earlier today, arrived and walked past @kallyjoe and I, and didn’t have the courtesy to say hello. I guess being a superstar gives you the right to be discourteous.

Tiwa Savage: First of all I’m sure you saw me rushing to the studio because I was late for my interview plus I had a hat on, second I’m glad I didn’t say hi because who are you to think you can’t say hi first.

Charles Anazodo: I’m nobody, just another human being. Cheers.

So the movie ends with more NIGERIANS (men and women) taking sides with Tiwa Savage. Her glorious ass was kissed to peel this time. But brother Charlse got the backlash.

And that’s how the story goes. Both parties have moved on. Tiwa has continued to push her 49:99 song. And praying against all olds to win the queen’s throne at the Headies later this month.

So she is probably devoting the times to the politics of that game. And Charlse Anazodo is back reporting sport and loving his wife and 2 kid (that is not to say Tiwa isn’t loving her family too. She’s definitely loving her son. It’s not her fault her husband left. And by the way, she’s got a whole lot of suitors standing by).

According to Charles, this is how he was raised. That he grew up being thought to greet people (elders, I think).

Many people say Tiwa is down to earth. So that says a lot as well about her training. Perhaps she was also thought right to be courteous.

And maybe she saw the dudes for sure and just didn’t feel like greeting them. Perhaps, because she’s the star. Charles can be a celeb too, but I think celebrity get levels. And we should all embraced our own levels.

Even Ediale is treated like a celeb these days. I go to some places and I am all greeted as a star. In my mind, I am like ‘am I a celebrity too’? But I know my level. I can’t start dragging fame with Tiwa.

And Tiwa makes good money — weekly, monthly e.t.c. I like to think some of this money these stars are making can also make them a bit proud. A bit I say. And I think we should understand with them.Some money dey burst humility.

So who is actually wrong or right here? Should Tiwa have apologized when Charles raised up the issue? Or was Charles also playing to the gallery by taking it first to Social Media?

I don’t think this kind of things ever bothers me though. Usually, as in, many times, I have found my self in Charles’ position. I didn’t say hi first and didn’t care about being ignored.

I see stars. Celebrities every now and then. I don’t usually say hi to them. The ones I have business with. I approach and exchange the basic courtesy.

Sometimes I greet the stars too. Most times I get ignored as well. That is life. All that teaches me, is to stay relevant. And by being relevant and having value to offer. There will always be other set of persons that can not ignore you.

No matter how much of a hurry Tiwa Savage was (and also regardless of the kind of hat she wore). If Charles was Oprah Winfrey or Beyounce or Mrs. Tinubu. She will wait, genuflect and say the hi in capital letters before going into the studio.

So such is life. And that is also understandable. Will saying hi to Charles increase her in life? We can’t categorically say yes. But in the case of Oprah, we can answer in the positive.

That is what it is. Life is just like that.

Tiwa must have been shocked to see the tweet. She didn’t waste time to throw back the punch. Sister wants to know who Charles thinks himself to be, that would make him be the receiver of her ‘hi’. Because in the situation, both parties were hoarding their HI(s).

What is the moral of the story?

Never delay your ‘hi’. Otherwise, it could become a social media debate.