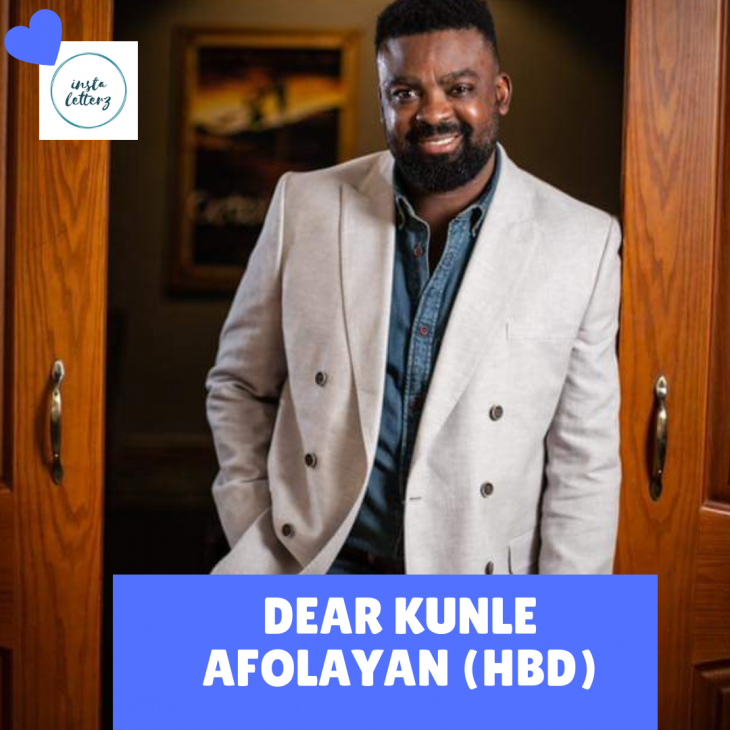 Just kidding 44 is fine (and old age too). 44 years on earth and you have already established yourself as a great actor, producer, and director.

One of the best.

Kwara must be proud of their son. They were proud of your father (Ade Love). And though they had seen the best son of the soil. But they now know and must be bragging about how fertile their soil is. Producing giants in theatre and film making.

That soil has produced a political giant too. Or is Saraki no longer a giant? I think he was a tall influence in the political scape. You don’t do politics, but you understand what I mean.

You once tried becoming a giant in Economics as you ventured into the banking sector after school. I guess banking was not for the creative head. Banking won’t offer you that platform to shine.

I hate banking too. While growing up, they made that work look so cool. But there’s nothing cool about banking and finance. Just figures, money counting, money management, and everything boring in between.

Banking is damn boring. I see bankers in banks, and I always pity them. I’m like what kind of work is this? This one went to school, attended all the school parties and lectures to come sit one place dispensing currency notes, taking records?

I usually just feel some slight pity for bankers when I see them in the bank. I do feel they are maltreated. Why lock them up in a spot to continue a routine.

That’s just me though. And how I see things. Don’t take me seriously.

So yeah, I understand you must have made such steps into the finance sector thinking it was more than it really is. No creative individual can survive that space.

But for you, thank God for New York Film Academy and the decision to go full time. But usually, no knowledge gained is ever a waste. Somehow it turns out to be a refinement.

Your 2005 decision has blessed many lives.

When you dropped The Figurine it was a new level for Nollywood. And then Araromire (which was in the Yoruba and English languages) came to be. Then Phone Swap (which featured Wale Ojo, Joke Silva, Nse Ikpe Etim and the legendary Chika Okpala) followed.

Your mark was made. It was a huge mark.

And October 1 came to life. It was a revealer, a revelation that things can be done great in terms of our filmmaking culture.

Tolu (wifey) and your three kids must truly be proud of you. Eventually, those are the most important persons in your life.

Like the April 2015 brouhaha over your tweet that implied that the Igbos were the lords of piracy and copyright infringement.

Or the interview statement about your disgust for Nigerian films. That story quoted you to have said,″Truth be told, I hardly watch them because I am keen on watching movies that will challenge me and change my orientation about certain things.″

I call these situations, re-thoughts. And that’s because you apologized and clarified your postulations when those statements resulted in a corresponding backlash and tongue-lash.

For the first one, you explained it was just a genuine desire to attack piracy and help Nigeria Cinema overcome the dreaded monster. The second, you said it was lifted and quoted out of context.

You have made impacts. You have created fine contents. Some are educative pieces like the one you featured my darling, Simi. I think that is a pure documentary. I like one location films. This was a good textbook for pulling a one-location film ‘stunt’.

Mokalik is a journalistic visual. An outlook of an important sector of the grassroots society. It could only have been done by you.

A commercial filmmaker dares to execute such a project at a risk. But it is also about making an evergreen, and something that gives an extra value aside entertainment.

That piece explains an important culture of our land. The way of life, which recruits kids of school age into an apprenticeship and turn them into dependable automobile mechanics.

And just like the nitty-gritty of the day to day lives of an average student in these mini mechanic villages that dominates our society. On the surface, this movie isn’t glamourous. It is not flashy. It is not a showpiece.

It takes the brilliance of you to ensure that acts like Ex-Big Brother Housemate, Tobi Bakare and music star Simi feature in the project. Somehow, their star power shines over the project.

What a black and white music video does for every true Rap Artiste, is what this film does to your CV. It may not be a showpiece, but it is a masterpiece.

I remember we started talking just after your movie Figurine. It was the Blackberry Messenger era. And you once threatened to block me on that platform.

Perhaps, because I was a handful or simply because it was your thing. Many who know you, know you are not slow to being displeased. You are a tough nut, strong-minded, a no-nonsense taker.

But you are a great man. One creative head in the hustle to stay relevant and successful as a perfectionist in a land that challenges every damn step of ambitions.

PS: You once refute being a role model, when the social critics won’t let you smoke your Shisha in peace. But hey, you are a role model and many parents pray their kids take after your footsteps.