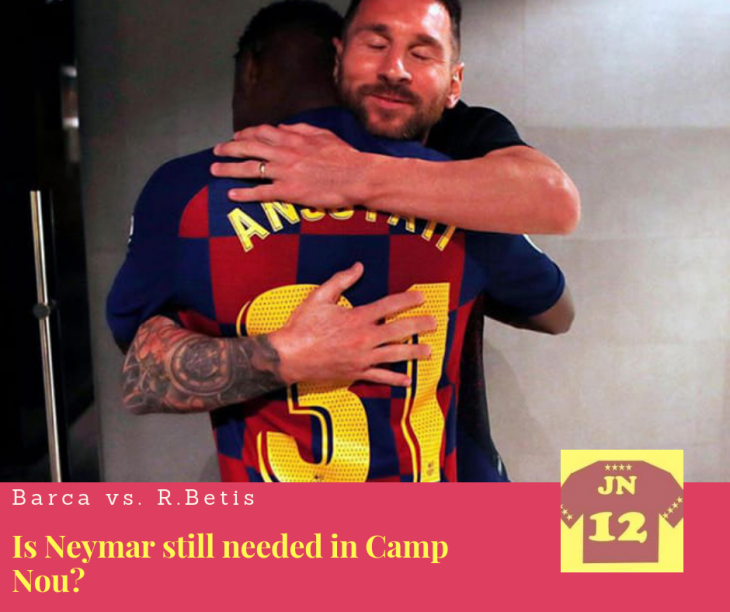 1. Ansu Fati, Carles Perez play better than Dembele. And you would think that is an insult to Dembele. But no. It is actually an insult to the 16year-old that just became the youngest footballer to play for Barca A in LaLiga.

2. I said soon enough, these boys will refuse to listen to the manager and do their thing. A night that started with Barca conceding a goal in the 15th minute would end up being a scintillating match to remember for Barca and fans as the end result is a true justification of the stuff Barca deed in second 45 minutes of the game.

3. Fekir is a quality player. His goal was awesome. But it was the night of Griezmann. I player I should be sending an apology letter to. But hey! This is Barca, when you fail us we don’t have room for you. We don’t celebrate mediocrity. Good for the French man, he showed some Barca quality. This is how a Barca player should feel.

4. And yes his 2nd goal is a Messi standard. A Messi – like goal. So it seemed we didn’t waste money after all.

5. At this point, seriously, any player added to cash for Neymar will annoy me. Rakitic is still some quality player. Unless PSG wants Dembele only.

7. Never seen Barca play this good for a long time now — that sweet soccer that causes romantic diabetes for the opponent.

8. Seriously Neymar can still be bought but it will break my heart and emotions if Semedo or Rakitic is included on deal.

9. Rafinha is very unlucky to be this good but under the shadows of Team A starters. Dude was awesome tonight.

10. Alba doesn’t link well with Griezmann maybe it’s something that will develop with time. But hey, Sergi Roberto does connect well with the french man. And the result is two assists. And I like Alba, he just had to score since he couldn’t have an assist.

11. The spirit of LaMasia was with Barca tonight. The boys — Ansu Fati, Perez and co — must have reminded us that we have a golden academy that once shock the world. It was awesome to see Perez score. And as I saw Ansu Fati play I just kept wondering why the heck we signed Malcom, Dembele and Coutinho.

12. I wish the boys can continue with this. They have the quality and if having Neymar will be at the cost of losing players who have shown these qualities. Then I do not think Neymar should come…

PS: The prospect of what’s to come in a midfield team of De Jong, Arthur and Roberto is something to smile about. As for the back four, I think Alba, Lenglet, Pique and Semedo is still the best option.