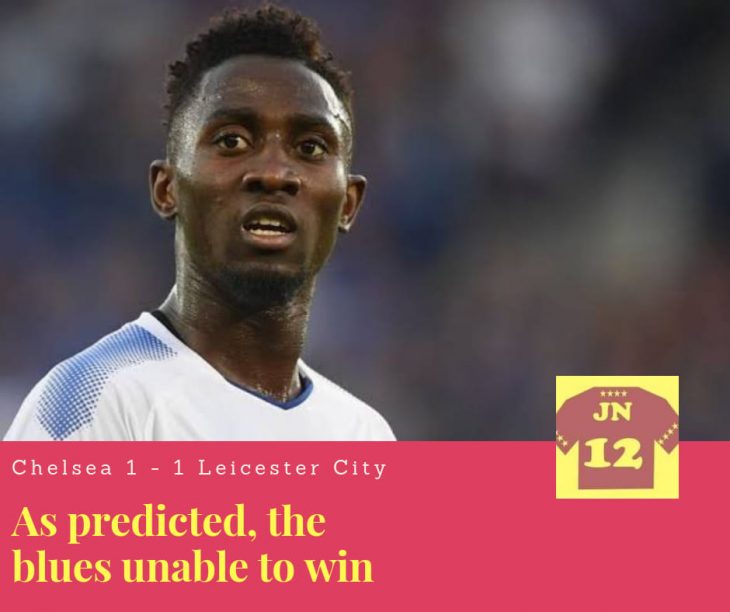 2. It’s an improved Leicester City squad. That has Maddison playing from the wing. And while Ndidi Wilfred is becoming indispensable. I am afraid Kelechi might have no room in that squad. Who is he going to bench?

3. But it’s a draw. And if you ask me, this is going to be a season of too much draws for Chelsea, lots of losses and few wins (sorry Chelsea fans)!

4. Now as a Chelsea fan, if you tell me it’s okay and expected this based on the Transfer Ban and New Managerial appointment. Then I will agree.

5. However, telling me things against what I know. Saying Chelsea will win the league this season or do well is a farce that doesn’t benefit your club.

6. No doubt, Mount shows signs of brilliance. But hey, the dude needs to grow first. And Pulisic is a player that needs a playmaker. So who is the playmaker for Chelsea?

7. The man wearing the 10 is relegated to the bench. And that narrative suggests he is not the trusted one for Frank Lampard.

8. Senior players don’t usually appreciate when their managers have less trust in them. And in Chelsea where the dressing room has a history of forming rebels against their managers. This becomes a tricky task for Lampard.

9. All these grammar means ‘there is problem in Stanford Bridge’.

10. Odoi (another playmaker that needs a playmaker) is injured. Otherwise, he could be very useful now.

11. How can Frank Lampard maximize the best from the legs he has? There is Bakayoko, Batshuayi, Odoi and others yet unused.

12. And why is Lampard continuing with the Sarri Ball? Why is Jorginho still playing Kante’s position? Why did Kante not continue with what he did against Liverpool’s first half? Why would a manager have pure gold in a Kante and no not what to do with him?