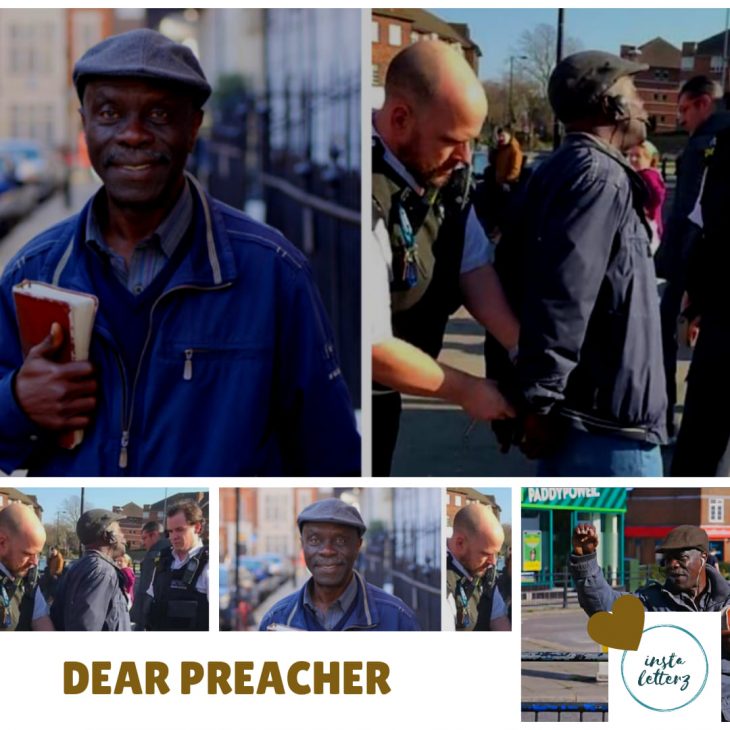 And you didn’t have to dupe or scam poor people off their hard earned money.

All you did was to preach and be arrested!

Oluwole Ilesanmi, I bet you have never been this rewarded on a single preaching in all your 64 years on earth.

I saw your video made viral.

Where you were preaching outside Southgate Tube station in London. I saw in that clip how the London police asked you to stop but you refused.

They had to arrest you when you became adamant. And as they took your Bible to bend your hands into the handcuffs you asked they shouldn’t take your Bible away from you.

But they did and walked you to the station.

I read in Naija Box that this happened back in February. That it was a passer-by who called the police against you for making ‘hateful comments’.

I read The Scotland Yard awarded you the £2,500 for wrongful arrest.

A compensation by the Metropolitan Police for wrongly accusing you of Islamophobia.

Well lucky you because if that happened in Nigeria. I don’t think justice would have happened or be this swift to happen.

In short police won’t just take your bible and arrest you without few slaps and kicks.

Then again, this is Nigeria I don’t think anyone complains such to the Police. We are a Christian and Muslim state.

But what are we going to do with this money?

It’s not big enough to build a church but it is quite enough for some house party if you ask me.

Whatever you decide to do with it. It’s your money.

Some days back TVC showed some very disgraceful situation. A report showed a Sunday service turned WWE as pastors started fighting over money.

It was a sad one.

But hey let’s not spoil this good news.

PS: Who wants to hear my sermon this morning? I am outside Southgate Tube Station please someone should call the police on me.