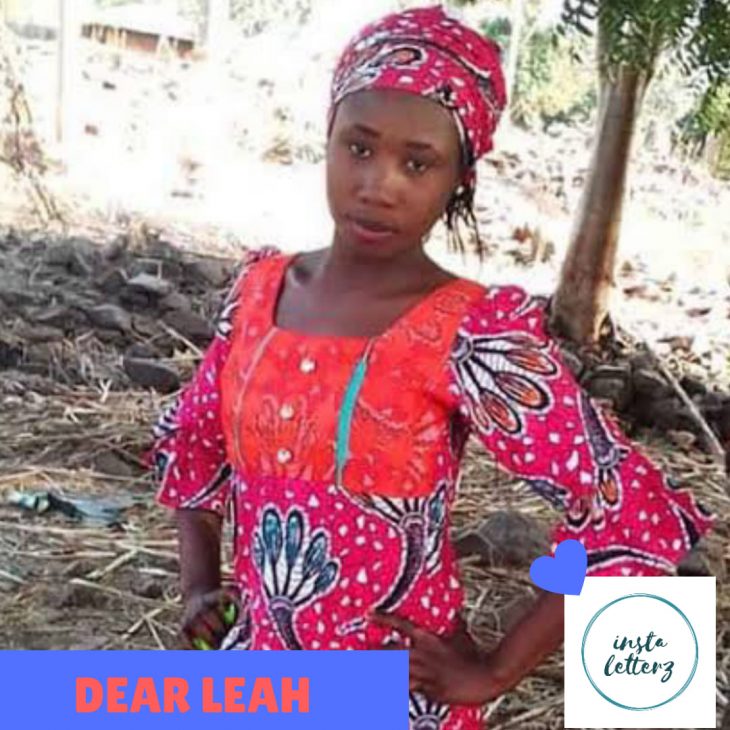 Child is born. Mother rejoices in the peculiar way they do. She does so because she lost a lot of blood. And she had a lot of pushings.

But she is okay. She likes the way she rejoices. She can’t envy Father. She understands father has strength to jump and dance before dashing out to inform relatives.

She knows. Mothers usually always know things. She knows it’s a girl long before now. So when the nurse gossips, ‘it’s a girl’. She nods and smiles in slow mo’.

She knows what her name will be. Before now, ‘Baba’ already said Leah was a perfect name. He wanted Leah because she was the first wife of Jacob and the mother of his seven children.

Mother understood that father wanted this baby to be special. To be the first at all she does. If she knows the desired position for her. She’ll be guided by it. Mother likes that, so mother loved the name even before she was born.

So here she is. Pretty baby of grace.

Leah lived in Dapchi. She grew to be first in all she did. Academically she was the best. In the local church, she became the first to show up every Sunday.

And so she was deeply in love with Jesus. She loved her name and understood why her parents named her Leah. So other Bible characters drew her attention.

She read the Bible daily and appreciated it.

She loved the nation too and had hopes of becoming Nigeria’s first female president.

She carried that vision in her heart until February 19th, 2018. She was taken along with 111 other school girls. Kidnapped by the Boko Haram members.

And her vision and dreams from that sad day were under attack.

Others were brought home later. I mean the 111 girls. But she was held back because she refused to be handed a second-hand lifestyle.

To denounce Jesus Christ. Was to denounce her calling. If she claims not to serve Jesus Christ or reject him. She would be rejecting her essence. So she understood it. That she learnt in the Bible lessons of her Sunday schools.

She wants to be first. She rather be killed than become a counterfeit. Her religion, her destiny, her dreams. A girl with such a strong heart.

Many old pastors of today’s glorious assemblies with heavy bibles and dripping anointing would have denounced Jesus Christ. They would have understood or drafted a message in their hearts to console themselves while they denounce.

After all, they understand a level of grace that many do not know.

But Leah is special. 16 years old woman of God.

In August last year her recordings were obtained. Therein she begged the President to come to her rescue and reunite her with her family.

This is what she said:

“I am Leah Sharibu the girl that was abducted in the GGSS Dapchi. I am calling on the government and people of goodwill to intervene to get me out of my current situation.

” I also plead to the member of the public to help my mother, my father, my younger brother and relatives. Kindly help me out of my predicament. I am begging you to treat me with compassion, I am calling on the government, particularly, the President to pity me and get me out of this serious situation”.

Mother cried the in way mothers do. Beating her body and soul. Tearing her hearts out in anguish. She does so because she pushed this kid to the world. She feels helplessly guilty already. She did a lot of pushings and when the child dropped crying. She promised her it was okay. She caressed the baby and told her it was okay.

But it didn’t turn out okay. And so ‘Baba’ understands her sufferings and tears. Father cries too. But not as loud as he did rejoice when Leah first came to the world.

Father cries in side because people told him to help his wife be strong. The only time he cries so loud is when he is all alone.

Another video recording is obtained by Press Men. Therein the aid workers who were kidnapped in Borno state last week spoke about their situation even as they called for help and pray that they are rescued and not allowed to die like Leah Sharibu.

PS: What is life? Oh Dear Leah. No goodwill Nigerian was available to save her.