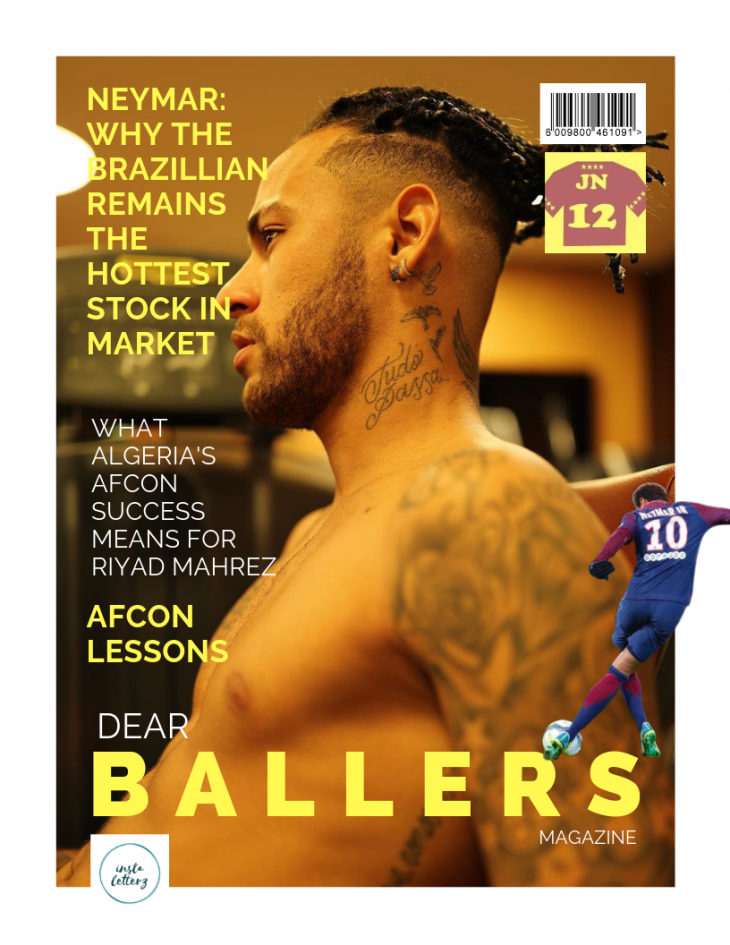 The chances that Neymar da Silva Santos Júnior will remain a PSG player after all the noise and tantrums are quite unpredictable. The only constant thing for sure is the value of the decision at hand. The stock upward valuation that Neymar couldn’t achieve last season on the pitch, has managed to rise so high during this transfer window. Ediale Kingsley presents the prognosis and situation in this very maiden edition of Dear Ballers Magazine.

“Neymar should be playing for Barcelona or Manchester City, and good for him both clubs are bidding for him”

When Neymar went to Ligue 1 to play for Paris St-Germain. He did so thinking it would increase his personal worth. He left a club that considered him heir to the Messi-throne. The Brazillian jumped into a dream well painted in his head. He had a dream: where he wears the number 10 jersey, goes on to win the Champions League, show the world that he is worth much more than being second-to-the-best, be the best, get the corresponding accolades and possibly gets the Ballon d’Or.

2 years later, after 37 match appearances for PSG, after 34 goals for French Champions…

Neymar is nowhere near the dream. It’s now clear that he made a mistake.

An expensive mistake that has wasted the time of everyone involved:

In all the issues about getting Neymar, one thing remains a thing of concern. Neymar seems to have become a person with a bad attitude. He showed Barca that side of him when he wanted to leave by all means. Now, he is showing PSG the same shit.

This thing about him biting the finger that signed him should a thing of great concerns to suitors. Like a fine bride, the groom-to-be must understand the baggage that comes along with the pretty face and sexy shape.

It’s not news that Riyad Mahrez captained his Algeria National team to the nation’s first Africa Cup Of Nations glory. That is something huge for the North African. Although it was more about teamwork for the Desert Warriors Algeria yet it amounts to something more for the team’s poster boy. 2019 saw him winning the prestigious EPL title, Calling Cup, Charity Shield and the FA Cup. Adding the Nation’s Cup puts him in the race to win Africa’s Best Player of the year.
The only player that could stop him from picking up that piece would be Liverpool and Senegal’s Sadio Mane.

Mane won the Champion’s League with his Liverpool teammate, Mohammed Salah. Those who see the Champion’s League as bigger than the entire 4 trophies picked up by Manchester City in the 2018/2019 campaign will likely give the Best Player Award to Mane. Mane is also favourite considering he was more impactful in the UCL title than Mahrez was with City’s 4 titles. Since Riyad Mahrez often played from the bench in that campaign.

Another point for Mane was the fact that he came as 1st runner up to winning the Best Africa Player award last year.
But if you consider that last goal that came off Mahrez’s freekick against Nigeria at the Semi-Final bout. And the fact that this is Algeria’s first Nation’s Cup trophy since 1990, then you just may favour the Manchester City winger.

Otite Dafe of Nigeria Football 360 and I had some back and forth talks about the just concluded AFCON. Dafe is one of the finest trackers of Nigerian players I know. He is passionate and has a penchant for discussing Football as it affects the Super Eagles.

So when I went ranting about how we shouldn’t be celebrating a Bronze. He tried to make me see the reasons why we should accept what we have earned.

“Ediale let’s tell ourselves some home truths. Our football is a shambles. A couple of questions

“With the Hifl league and the Aiteo cup matches, we don’t have a chart for highest goal scorers or any statistical records.

“How then do we become “best in Africa” when CAF competitions are starting on August 8th and we have not yet decided the 4 representatives? Let’s even say the Aiteo cup final is tomorrow, that means the club that gets the final confederations cup place will have less than 6 weeks to recruit, register and Train new players.

“When is the transfer window closing? We don’t know.
We couldn’t even run a local league properly, is it a wonder we don’t produce quality players and we export them for “finishing”?
I spoke with a NPFL player yesterday. I said “Rangers have resumed training for next season, when are you guys back in training and when is the league starting”? His answer? “I don’t know, our club chairman is in Egypt, when he comes back we will know”

“How do we become Best in Africa? Is it by looking all over the world for players and coaches? The two coaches in the AFCON final are local coaches, many of Algeria’s players are local players, their league is one that our players aspire to go to. Same as Tunisia, Egypt, and Morocco and South African leagues.

“If the grassroots football is dead, then we are training substandard players who go abroad and struggle. Top scorer 2017/18 season Junior Lokosa went on trials last year, he was rejected by several Scandinavian clubs, finally signed for Esperance in December, it took them almost six months to get him in shape to play for them. Let’s tell ourselves some truths, the house is built on sand, until we put in the foundations we will keep “punching above our weight”

And yes I agree with Dafe but we must question the status quo. We must challenge our challenges. We are talking about Team Nigeria here. We surely have no business celebrating Bronze or Silver.

Sunday Oliseh agrees with me as well. According to him, Madagascar can celebrate Bronze, Togo and others can. But not Nigeria.

I understand the young players in the squad will be excited to have picked up something from the tournament. And yes we had a lot of first-timers and young lads in this edition of AFCON. Maybe they should celebrate it. But until we start hating the norm and average we may never get to becoming the champion that we ought to be.

We also have to address the main issues raised by Dafe. We can’t claim to like football and be bothered of how they perform at continental and intercontinental tournaments yet we care not about how we fare locally.

Why it’s so difficult to have a sexy league is something I can’t grab.

Surely we will keep the conversation ongoing. Someday we get to the root of things. Someday a solution will arise. Someday a messiah will come in the form of a Dangote or a President. Until then, let’s keep talking.

In another post, Dafe Otite talked about the future of the Super Eagles after AFCON ’19.

With John Obi Mikel and Odion Ighalo now retired from international football, I thought to have a look at the implications for the squad going forward. Four other Super Eagles did not have a great tournament:
John Ogu and that awful back pass in the game against Madagascar. He played less than half of a match being substituted soon after.

“Leon Balogun who played maybe two matches and was the second part of the calamitous incident against Madagascar.Shehu Abdullahi who broke down injured…. Again!! In the first match and took no further part in the tournament (identical to his world cup experience)And Ahmed Musa who turned in an underwhelming performance match after match throughout.

“Okechukwu Azubuike, the under 23 Captain is ready to step up and combine roles, given his performance in the Turkish league last season as well as he’ll be playing on the Champions League next season. Much has been said already about who should take Mikel’s spot in the squad and a lot of noise about Kelechi Nwakali, but I think he needs to seal a starting berth in a club and consolidate his spot in the under 23 team before he can be considered for a spot in the senior team.

“Victor Osimhen should be able to fend off challenges for the role vacated by Ighalo. I think it’ll be a toss up between himself and fellow under 23 striker David Okereke (Club Brugge) and Stephen Odey (Belgian champions Genk). Two out of three for lead striker Super Eagles and under 23 spearhead. The other may take Onuachu’s place?

“Mikel Agu is already around the Super Eagles, being placed on stand-by for AFCON. A good start to the 2019/20 season could see him snatch John Ogu’s place in the squad.

“Junior Pius, recent move to Royal Antwerp could see him unseat Leon Balogun in defence. Leon still has a role to play in the SE for the next few years, but does need to settle his club career if he’s to keep his place in the national squad.

“Tyrone Ebuehi should make a come back to the Super Eagles. With Aina, Awaziem and Collins acquitting themselves very well, Shehu has to be the fall guy. Tyrone’s return to the squad would see us have four very good full backs in the squad for the first time in a long time

“Anthony Nwakaeme was over looked for the Super Eagles, despite a fantastic season in Turkish premier League side Trabzonspor. He was the only Nigerian player to produce double digits for goals scored and assists (12 and 12) anywhere last season. In contrast, Musa was underwhelming in AFCON and surely should be looking over his shoulder”

Again, I agree. And we can only hope that some of these players continue with a rising form. Suddenly we now have adequate competition for left-backs and right-backs. Everything depends on what they go do in their respective clubs this season as well. And I think we haven’t heard or seen the last of Kelechi Iheanachor. I love the Nwakali brothers as well. We need to monitor them.

Dafe says “it remains to be seen how Iheanacho responds this season.
For the Nwakali brothers, Chidi is not getting on the bench even at Kalmarr in the Swedish premier league, seems to be dropping off the radar since his short stint in Poland. As for KN, he needs a good loan deal this season and to consolidate his under 23 platform. A good run with that squad with the AFCON under 23 qualifiers might see him get more game time in friendlies coming up. I think he needs to take it step-by-step. A lot of people have been mentioning him, but he’s not done too well last season in Porto B team.”