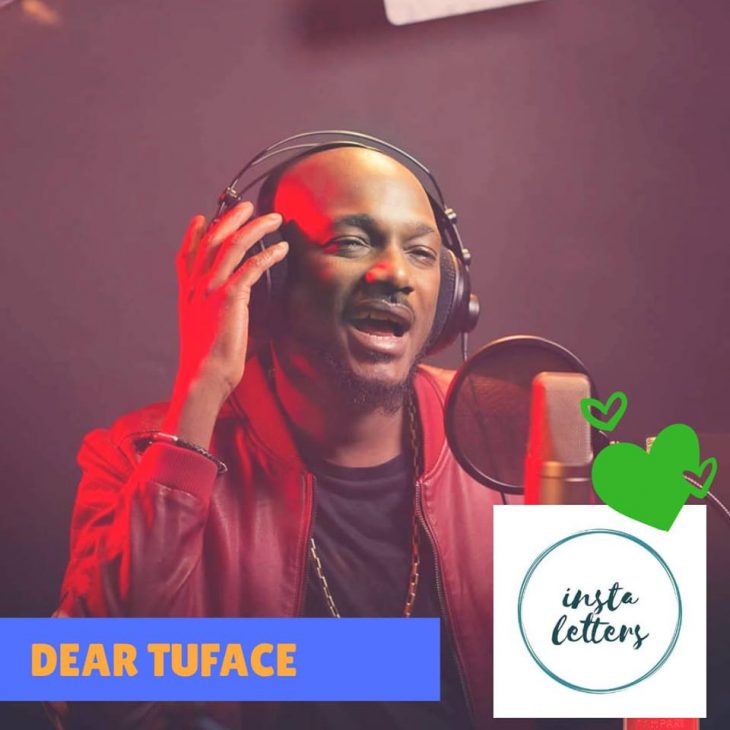 This is an old letter:

How do you do? Splendid? How are the endorsement coming through? So you also need our attention? I would have sworn on my neighbor’s daughter’s love that you have had enough attention to last you a lifetime and afterlife.

But you had to do a Seyilaw on us. Too bad. But on second thought, maybe, just maybe you do deserve some attention. Let’s face it Tuface is not getting same attention Davido and Wizkid are getting.

In one of Davido’s show Tuface would almost attempt to bow to Davido on stage. It was almost going to be an eyesore. The thing is this wasn’t the humble Tubaba at play. Sources allege that Mr. Innocent was innocently drunk.

Dude was off on the alcohol.

And the mighty musical god would genuflect. To the little boy on stage. But before Tubaba could go down, he was suspended on the air.

He would be eventually guided off the stage.

So why did he drank so much that day?

This Benue born has never had a day that bad on stage in his entire career. And dude has had a lot of stage time. A lot.

So do we have an emotional matter in our hands? Is Tuface losing it? Is he throwing in the towel?

But he is still relevant. He is still very much in the business. Still having the endorsement and even the young kids still FEAR him.

They all respect him. Tuface still blesses every beat. He still releases hit bangers.

We just could never know.

But here is the guy who started his fatherhood with a lot of jokes still attempting to make more jokes with his family as the joke material.

He raised dust, online, when he started begging his wife and manager on his social media space. He said he had flopped and apologized to Annie.

And the internet broke.

But he’s showed up this morning to laugh at us. He insists that we should all look for good news to share rather than wait to spread bad news.

The issue with this trend is one day these celebs will be in real shit but there will be no way to get the needed help online. For all will think it a joke.

Anyways, when he was joking about on twitter. I was thinking about how the supposed tale of his infidelity could have affected his Coca Cola deal.

We all know Coca Cola endorsed your fam. We saw the ad. You, Annie and the kids.

Coke was promoting Mama The Mama. The 1littler coke drink. And I told my friend that if this post of yours had anything to do with infidelity. If it meant another baby mama was about to be introduced to us.

Then it was another creative opportunity to introduce another product. The last one was Mama De Mama and Anne Idibia shone with the family.

This one will be Baby Mama The Baby. And will feature another young girl with vagina, pretty face (hopefully, cos when these stars are drunk standards are low ) and a baby in the womb. Maybe a bottle of 40cl.

My guy, aka father Abraham. Please be contented. You have tried. Your aka as Father Abraham is apt and enough. Please, no more drama. Thank you.

Will always ink you. You are fam. I was on set (at the beach scenes) with Annie on The List movie production. With Saheed Apanpa and Julius Ephraim.

Annie is down to earth. Please respect and love her.

PS: You are an ambassador to Coca Cola. Please behave like one or go become an ambassador for Kunu or Burukutu and Zobo and leave our darling Coke alone, if you wanna misbehave.