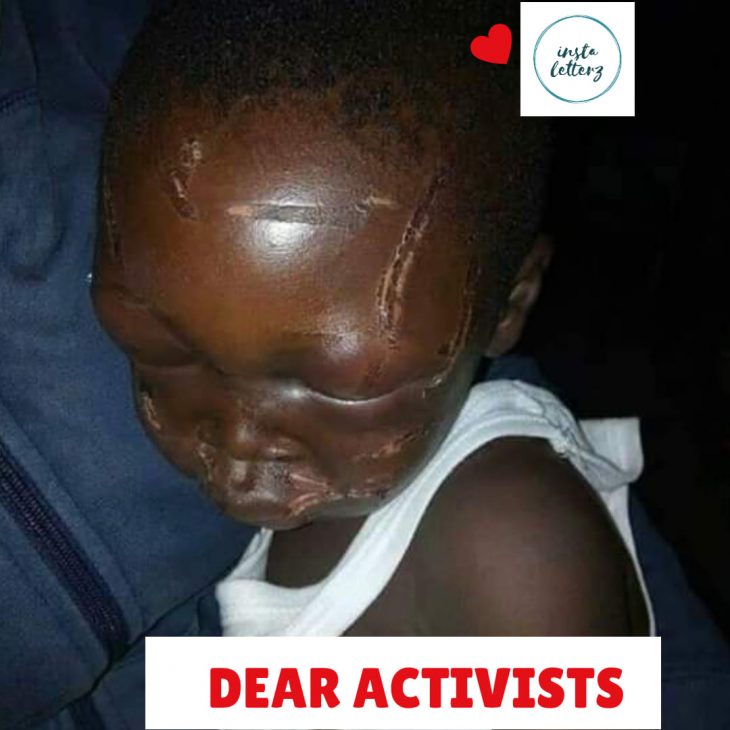 We need you.
Nigeria needs more activists for children. Children, like the one in the cover photo, are exposed to a diff kind of struggle, across the globe.

The unconfirmed story here is that a stepfather did this damage. Photos like this should make us sick. This doesn’t have to be just another pic.

What’s the level of our bills? What kind of life do we have down here? Down here, meaning Nigeria (or Africa).

I am not saying Child Molestation only happens on the black continent. I am just asking that we uncover our policies and laws protecting children. I am asking us to discuss our national provisions for kids.

What happens when two idiots come together to make a child? Knowing that as we speak, many idiots are about becoming parents. One idiot is probably making one now.

Idiots as in stupid individuals at heart and in the head. Mental retards who aren’t exactly mentally ill enough to relegate their physical being to Yaba Left or Down Market.

They appear normal. Dress normal, eat normal and look normal. But they do not have sense. They do not think before their actions. The crazy idiots who are amongst us.

We see them every day. They are our neighbors. Some, our family peeps.

They have 10 – 20+ kids in a room and parlor self-contain. They trust in the God of their religion to make great provisions and guidance. Their only responsibility is to be physically fit to make the kids.

Their fathers, forefathers, and ancestors had a 25-kids-to-one-man situation. And they have given up on beating the records they do really intend to break. So they just want to settle for a dozen.

Yes, the adults of nowadays with such mentalities.

Yes! We have such in our societies.

The idiots that recruit kids into hard labour.

We are all guilty of this one. We patronize these kids. We do nothing about it.

To justify the dark deeds we call the sin a sweet name.

A little boy at roundabout facing Akerele Street, Surulere, has carried and repaired so many car tyres bigger than his body weight for years.

I was told he has been doing this since he was little. His hands have become that of a man. His body adjusted to his struggles. Although he is a kid.

But we all saw this boy and look the other way. We park our cars and ask that the damaged/punctured tyres be repaired. We care less when we see the owner of the workshop ordering kids around to do the job.

The other day. I saw kids of ages 10 & 12 demolishing a shop. All in the name of being bricklayers. The little kids were hammering down a partially demolished concrete structure.

All I could do was speak.

Spoke to their master.

That’s a story for another day.

We joke about the privileges enjoyed by a child in a developed nation.

We brag of our disciplinary status and culture. But we are insane.

‘Spare the rod, you spoil the child’, we are quick to retort.

But we have spoilt the rod against the child. We have damaged the kids.

And there are mothers who no longer want to be mothers.

No breastfeeding, so the breasts won’t sag.

No backing, so the shape can still slay.

No attention, so the Zee World won’t waste.

‘But life is not that serious’, you say.

But please. Have the number of kids you have time and resources for.

You already know the Government and national leaders don’t care.

Their kids are flown overseas to sturdy. The infrastructure they build has no consideration for poor kids.

The public schools are death traps. No one bothers to check if the teachers are the same or not. Or if the structure by the school is built to collapse against the kids.

Remember their kids are far away in a society that cares.

There is actually a National Child Welfare Policy (of 1989). But how thoughtful it is surely is another thing.

Which is why I call for more child advocacies and advocates.

We need people to stop the idiots that are marrying kids.

Most Nigerian kids suffer from many demons and devils.

You can play an active advocacy role today. Start an NGO or something. And there are awesome grants by bodies who care more than our national fathers.

For instance, there is a grant available at the moment:

The purpose of USAID/Nigeria’s Integrated Child Health and Social Services Award (ICHSSA), (hereinafter referred to as the Activity), is to reduce the impact of Human Immunodeficiency Virus and Acquired Immune Deficiency Syndrome (HIV/AIDS) on orphans and vulnerable children (OVC). ICHSSA will ensure that OVCs are cared for and protected by their households, communities, local and state governments.

USAID intends to provide approximately US$67 million in total USAID funding over a five-year period to cover the four awards.

And there are many such grants and good people waiting for you to start something.