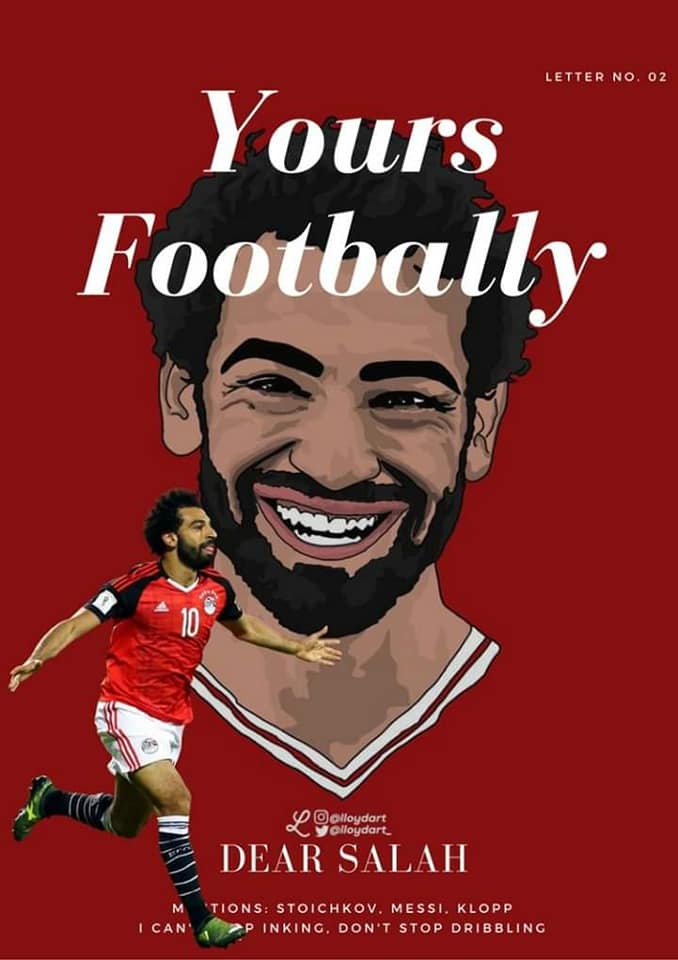 I am writing from Jersey Number Twelve headquarters. You are one player I can’t wait to see at the world cup. It looks like it’s going to be the year of the Africans.

Do not find contentment in the title the European media have given you. They call you Egyptian Messi. It’s cool but what good will being a secondhand Messi do to you. Go and win the Best Footballer award and create your own greatness.

Leo Messi has only one head (your head is even bigger and his hairs aren’t even as long as yours). Okay, don’t get me wrong here. You’ll never be better than Messi. But you can snatch a Ballon dOr.

Just get one. For your darling Magi’s sake. And also to your sweet daughter, Makka. You have Jurgen Klopp to prepare you for glory. But can Liverpool FC as a team help you do the needful?

However, I do not believe Liverpool is where you can become the best player in the world. But here is the deal. If you keep being this awesome. And Liverpool doesn’t sell but strengthen their squad. I can predict that Liverpool will win the EPL come next season.

At that point, I will advise you move to a club that can win you that Ballon dOr. Madrid or Barca…Or Manchester City.

Yes, Man City! And don’t you even think of giving me that subtle consternation. Just listen to me, don’t join all these anti-Pep people to disregard my opinions. First of all, I am not you mate, when your parents were looking for a clinic to give birth to you in 1992. I was looking for how to watch the first El Clasico of the 1992 season. Then, Luis Enrique was a Madrid player. Goals from Stoichkov and Bakero ensured Barca won the match 2-1.

Mohamed Salah, you were born the day Barca won Madrid in the first El Clasico of 1992 season. So what other signs do you need to know that you are destined to play for Barca? You can either play for the EPL’s Barca (Guardiola’s Man City) or go to Spain and do the do.

I try to prognosticate. To see the future, after the reign of Cristiano Ronaldoand Messi. I see Mbappe, Neymar Jr., Eden Hazard, Philippe Coutinho,Harry Kane and you dominating for two clubs. I see three of this 6man killing squad play for one club and the other three play for another club. These two clubs, I may not be able to name exactly. But I’m sure it will be from this set: Manchester City , PSG , Madrid, Barcelona, Bayern Munich, and Juventus. I admonish you to always think towards this line as you climb the career ladder.

Liverpool at some point will let Klopp go to Bayern Munich… Then that will be a sign of my prediction coming to pass.

On a lighter note, how do you say booty in your language? I know a lot of Chelsea and Man United fans who will like to reward you for stopping Man City. They plan to send you thick African women from the Yoruba Nollywood.

Every attempt to let them know that you are a good Muslim like Ahmed Musa was to no avail. They ignored my sermons and instead enlisted the following voluptuous women: Eniola Badmus , Ronke Oshodi-Oke , Foluke Daramola , Ireti osayemi Tayo Odueke a.k.a Sikiratu Sindodo, Ronke Odunsanya and Dayo Amusa.

Try to google these names and see what I mean by thick-women. When I saw the list, I couldn’t help but say a prayer for you. As I write they are already in the UK. So enjoy. Those are the very best ladies any typical African man will dance one-corner for.