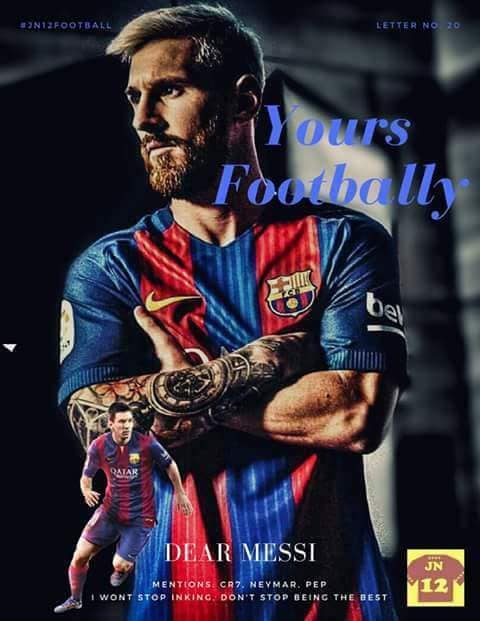 Thunderous greetings from Jersey Number Twelve headquarters. We are all Messimists here because you inspire us to be the Messi of our fields.

I would have sent you this letter earlier than this. But how do I communicate to an ecclesiastic celestial with the words of worldly beings? For though you honor humans of the terrestrial with your soccer gift, you are surely not one of us. Thou art god.

In seeking to learn the celestial language, I stumbled on a bigger story. The story about your creation and purpose on earth. I visited a place called Heaveland and was told…
In the beginning, the Creator created the creative one. He was to be named Maradona. Mara meaning bitterness and Dona referring to oppositions. The creator created him to bring bitterness to any opponent that challenges him.

He grew to be just that. In the pitch, Maradona caused mayhem to the opposing sides. He wasn’t the tallest, but he had the tallest records of people he brought down. When he played, the gods smile, the people rejoiced and the creator was entertained.
Maradona was to be the greatest footballer the world would ever know. The creator said, ‘I will make Maradona a dwarf to humble the proud mighty’. But Maradona was warned by the creator not to be proud and he was not to eat, drink or inhale the forbidden powder.

But the people worshipped Maradona to a point he became proud. The creator wasn’t happy so he placed a curse on Maradona, ‘You will never win a Champions League’.
Vexed by the curse, he sank and bathed in the forbidden powder. And gradually, his immortality vanished and so also his ball brilliance.

The creator, gods, and the people were all unhappy. No more divine entertainment! So the gods went to have a meeting with the creator concerning this matter.
The people also sent a scientist called Pioki to an alien land called Alix Portux Galaxy. Far into space, near Pluto. This was a secret mission sponsored by the then U.S President, Ronald Reagan , on behalf of the people of the world.

Pioki was able to find an alien called Oroiiro. He was brought to earth and named Ronaldo (a combination of the dominating O sound in his alien name and the name of the project sponsor). The scientist gave him the best of the human body and looks. And programmed him to talk and play football. Then secretly planted him into a small Portugal family.

The creator and gods knowing what humans have done decided to send another Maradona. This time it will be one of the gods. They can’t trust another creatively created human.
Who will go?

While Maradona was an extrovert, this god was an introvert. He was planted in Argentina but he will be far in Spain. So the worshippers of Maradona won’t corrupt him. So he could learn humility from the Catalonia people.

While Cristiano Ronaldo was perfect, this god would come with a great defect. A bad leg. A deliberate handicap to show class above humans. He was named Messi from MESSI-age (for he was a message to the people to always wait for the creator for divine help).

Leo Messi had a forerunner, a Johnadinho the Baptist, a Brazilian named • Ronaldinho •. While Ronaldinho Gaúcho baptized the opponents and defenders with water bending skills. Messi was coming to baptize defenders and opponents with fire.

Messi this is your story. You are the fire and air bender. You move and the earth shifts. I know this story sounds like a fallacious fable to you. I can explain.
My source at Heaveland told me immediately you landed on earth. The creator gave you a brain reset. Your memory as god has been wiped off. You will regain your memory when you retire from soccer.

For sure, you have been a blend of magic and maverick. You are a maestro, magician and a superhero all in one. Superman had Kryptonite as his weakness, yours is the forbidden powder. Never go near it! Same way Adam was to stay away from the forbidden fruit. You will win everything, the World Cup inclusive.

Tell me, is there a chance you get to employ me into the family business?

I won’t charge much. Just a little bellow what your brothers get.

As you go hunting for the last trophy- the World Cup – try not to score too many goals against Nigeria. It’s my country and for obvious reasons, I am rooting for Argentina and Nigeria.

Talking about Nigeria, what say you about this idea: a Victor Moses in Barca?

Too old? He’s only 27years old. Kindly consider him, even from the bench. I will always prefer him to Nelson Semedo. Truth is I don’t trust all those Portugal players in the team.

let me know your thoughts on this.

Until we see in Russia, it’s goodbye and God bless. I won’t stop inking, please don’t stop being the best.